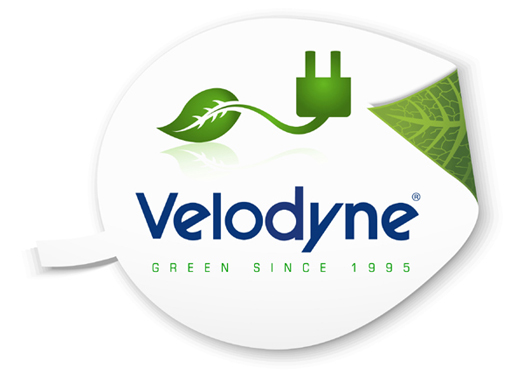 David Hall, founder and CEO of Velodyne, designed and developed the Energy Recovery System (ERS) Class D amplifier that was first used in the company’s F-1800 subwoofer and patented in 1999. Class D amplifiers typically run at 90% – 95% efficiency compared to Class AB amplifiers that operate at below 78% efficiency. In addition to the Class D design, Velodyne’s ERS amplifiers recover some of the energy wasted by the speaker’s voice coil and reuse it, thus driving efficiency even higher, up to 97%.

Many past and present Velodyne subwoofers utilize the Class D design including Digital Drive, Optimum, DEQ-R, SubContractor, MicroVee, MiniVee, and the flagship Digital Drive 1812 Signature Edition. The Impact Series is also moving from a Class AB platform to Class D.

Extending the company’s green initiatives to other areas within design and manufacturing, Velodyne is moving to a higher grade MDF (Medium-Density Fiberboard) in the production of subwoofer cabinets that complies with the new CARB (California Air Resources Board) standard, which is the toughest production standard in the world and assures that Velodyne subwoofers will exhibit low formaldehyde emissions. For product packaging, Velodyne is currently conducting drop testing on a single carton solution for shipping its subs, which will result in an earth-friendly solution in the reduction of the amount of materials needed.

“We have a long history of commitment to the environment and energy efficiency and it’s an important consideration in everything we do,” said Bruce Hall, president of Velodyne. “Our Class D amplifiers are just one part of a multi-faceted approach to improve the performance of our subwoofers and protect the environment as well.”

Velodyne products are fully RoHS (Restriction of Hazardous Substances) compliant. RoHS is a European directive aimed to control the use of certain hazardous substances in the production of new electrical and electronic equipment. In effect since 2006, the directive restricts the use of mercury, lead, hexavalent chromium, cadmium and a range of flame retardants.

Velodyne is also working towards an ENERGY STAR rating on its subwoofers and implementing a 1 watt standby mode to comply with European standards. ENERGY STAR is a joint program started in 1992 by the U.S. Environmental Protection Agency and the U.S. Department of Energy as a voluntary labeling program designed to identify and promote energy-efficient products to reduce greenhouse gas emissions. The EU’s Ecodesign of Energy-using Products (EuP) Directive mandates standby power consumption limits and is designed to improve green performance and ban the worst performing products from the EU market.

Reducing its carbon footprint remains a priority at Velodyne and extends well beyond the design and manufacturing process. To help decrease emissions and energy usage, Velodyne worked with the California Public Utilities Commission’s AirCare Plus program to reduce energy consumption in their HVAC units, installed sensor lights in all offices and restrooms, and skylights were built in the manufacturing area. A watchdog program was instituted to make sure all lights and computers are turned off at the end of each day. Cardboard, paper, old computer monitors and printers, and metals like copper are recycled. Recycle bins for paper are located in each work area and bins for aluminum, glass and plastic are located in the company cafeteria. As desktop computers become obsolete, they are typically replaced with laptop versions which use less energy.

About Velodyne
Velodyne Acoustics, Inc., founded in 1983, is universally recognized as the leading manufacturer of high-performance, low distortion, powered subwoofers at all price levels. Headquartered in Silicon Valley, California, the company’s technically innovative audio products are available through a select group of authorized dealers, custom installers, and distributors worldwide.