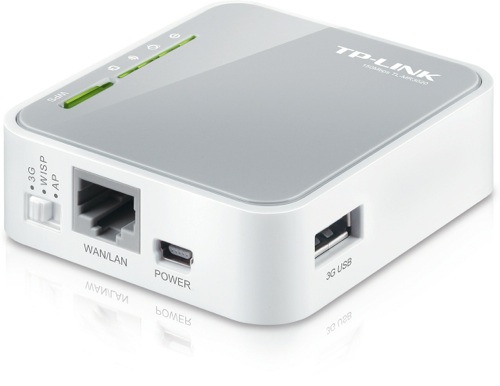 TP-LINK announced the Portable 3G/3.75G Wireless N Router (TL-MR3020) which connects to the Internet via 3G cellular networks — the same network that your mobile phone uses — to keep you online and connected anywhere. Simply plug in the 3G USB modem to TL-MR3020 and establish a Wi-Fi hotspot instantly. With its travel-size design, TL-MR3020 is compact enough to take on the road and share its 3G Internet connection wherever coverage is available. The device comes with three adjustable modes: 3G Router Mode, WISP Client Router Mode, and Access Point Mode. Additionally it can be used as a Wireless Router, Range Extender or Wireless Bridge. The router can be powered through a USB connection or external power adapter, both included with the device.

The TL-MR3020 allows user to easily share a 3G/3.75G mobile connection with family and friends on the train, while camping, at the hotel, nearly anywhere within 3G/3.75G coverage. By connecting a 3G USB modem to the router, a 3G Wi-Fi hotspot is instantly established. For power, the router has a Mini USB Port, which can be connected to a laptop or power adapter.

With One Button Security Setup, the TL-MR3020 allows users to instantly setup their security simply by pressing the WPS button on the router and automatically establishing a WPA2 secure connection, which is more secure when compared with WEP encryptions. Not only is this faster and safer than normal security setups but more convenient in that users needn’t remember a password.