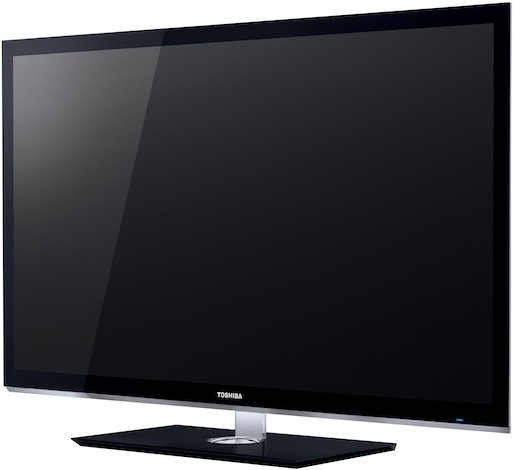 Boasting an ultra-slim depth of less than 1.2 inches, and Toshiba's high-style flush front design with sleek chrome trim and eye-catching illusion stand, the WX800 Cinema Series is the company's most meticulously designed and engineered to date. The WX800 delivers an unparalleled viewing experience with technologies such as 3D Resolution+® which delivers crisp, clear 3D content that can transform a room into an incredible 3D theater. Versatile as it is beautiful, the WX800 processes multiple 3D input formats, including MPEG4-MVC, RealD, and select others for hassle-free enjoyment.

The WX800 is a diversified centerpiece for any home theater, especially with its ability to access Toshiba's Enhanced NET TV service with Yahoo! Connected TV; a vast collection of favorite and brand new streaming content options await via a simple connection to the Internet, and a touch of the remote. The WX800's built-in 802.11b/g/n Wi-Fi® capability allows for a simple, clutter-free method to instantly access tens of thousands of TV episodes and movies from Netflix®, enjoy over 3,000 HD movies, video podcasts, and more from VUDU, catch up with friends and family on Facebook® and Twitter®, and explore new videos and photos on YouTube®, Flickr®, and more.

Wired connectivity is also key with the WX800, which has four HDMI® connections with InstaPort fast input switching, and the convenience of HDMI-CEC to control other CEC enabled devices using a single remote. A ColorStream® component input and high resolution PC input make it simple to connect a wide variety of video sources to the WX800.