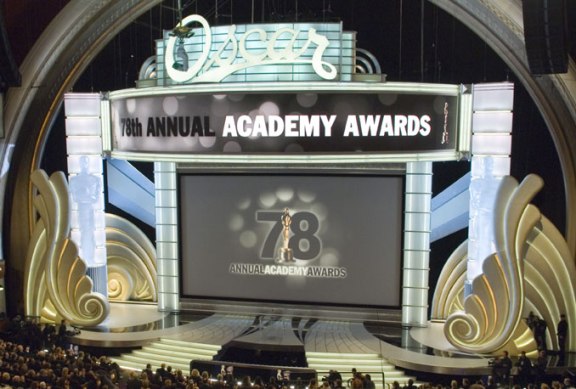 The “Best Picture” screen was a model ATM3M with an image size of 21 feet 4 inches by 38 feet and a 1.78:1 aspect ratio. The screen was a front-projection model with UltraMatte 200 material, which is 100 percent brighter than standard matte white screens. The screen descended no less than 13 times during the show.

The second screen was a lace-and-grommet screen (model ATM3) with an image size of 16 feet by 37 feet 1.25 inches. The screen’s 2.35:1 aspect ratio drove home one of the underlying themes of the Seventy-Eighth Academy Awards: that nothing compares with watching movies on a giant screen. The rear-projection screen was made of Filmscreen 100 material , which is excellent in rooms with wide viewing angles and where moderate ambient light is a concern. The projected image was truly stunning. VeLux was used on the 17 foot 4 inch by 38 foot 11.25 inch frame. The screen was flat, but with innovative set design, had the appearance of being curved for dramatic effect.

“This is my 18th year working with the Academy Awards on set design,” says David Taylor projection supervisor for the Oscars. “And I’ve been using Stewart Screens as long as I’ve been doing the show. Because of Stewart’s finesse with image uniformity and flatness, I insist on only Stewart screens for every telecast.”

The set was designed by Seventy-Eighth Academy Awards Telecast producer Gil Cates and production designer Roy Christopher. “I wanted to celebrate the movies and to include great movie houses and screens,” said Cates in a “Set Design” press release on Oscars.com. “So Roy went back to the classic ornate movie houses for his inspiration, which, I think, is superbly reflected in the final design.”

Stewart Filmscreen was a perfect match for this concept of old Hollywood glamour, as it has been providing the world’s finest projection screens for commercial movie theaters for almost 60 years. It is also the only screen manufacturer to have actually received two Academy Awards. The first was in 1956 for the engineering and development of the HiTrans and ParaHiTrans rear-projection screens, and the second was in 1964 for a seamless translucent Blue Screen for Traveling Matte Color Cinematography.

“We have a love affair with Hollwyood,” says founder Pat Stewart of Stewart Filmscreen. “We’ve provided screens for all the major studios and the Academy Awards going back nearly 20 years. Hollywood is part of our legacy as a company.”