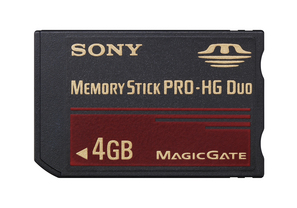 To support the growth of products that record large amounts of data, such as high mega pixel digital cameras and high-definition camcorders, Sony today announced the availability of its new Memory Stick PRO-HG Duo media, which offers data transfer up to three times faster than standard Memory Stick Duo products.

A Memory Stick Duo ExpressCard adaptor is also available. It allows Memory Stick PRO-HG Duo media to reach its potential transfer rates with personal computers equipped with an ExpressCard slot, including most of Sony’s 2007 line of VAIO computers.

With the use of the ExpressCard adaptor, users can transfer one hour of personal, high-definition video (3.6GB in AVCHD SP mode) from a Sony HDR-CX7 Memory Stick Handycam™ camcorder to a compatible computer in about two minutes.