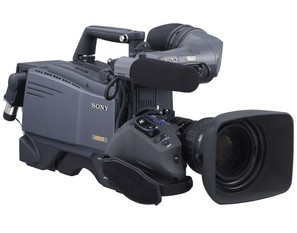 Sony is introducing a dual-format camera system, 1080i or 720p, model HDC-1400, designed for HD studio production at regional or owned-and-operated stations. This new camera offers a lower-cost entry into HD for broadcasters who do not require full multi-format capabilities, but still need a high level of signal format flexibility.

A new color viewfinder, HDVF-C35W, is also being introduced and is compatible with the new camera, as well as with several existing Sony cameras.

The new camera system operates in either 1080/59.94i or 720/59.94P mode. The system shares the vast majority of the image-making capabilities of the existing HDC-1500 system, including three-skin detail control, multi matrix color control and high-quality SD down conversion capability.

According to Willox, Sony’s HDC-1500 multi-format camera systems have been successful in several high-profile HD studio broadcasts and live events.

The HDVF-C35W viewfinder has a 3.5-inch LCD screen (viewable area, measured diagonally) and is designed to give shooters a color viewing option in shoulder-mount applications.

When using the new viewfinder, the camera’s eye-piece can be removed, allowing for “direct viewing” through the HDVF-C35W unit itself. The viewfinder also features a re-designed inner loupe to reduce distortion in the corners of images and to increase viewing angles.