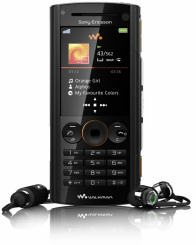 The msuic inspired Walkman range of Sony Ericsson mobile phones has now expanded to include a new model which bucks the manufacturers latest design trends, the Sony W902 has been initially released on O2 in the UK and offers the very best in mobile music features and technology.

The Sony Ericsson W902 is very different from a design aspect from the previous releases from the Walkman range, the last two launches were for flip designed phones, these being the W350i and W980i, the new W902 is a traditional candy-bar format design and packs a real punch when it comes to features.

The Sony Ericsson W902 incorporates all that is good from the Walkman range, shake control, multiple music file support and FM radio but this new model also offers a whopping 5.0 megapixel camera and up to 8GB of memory space.

With the Sony Ericsson W902, experience music as it is meant to be. Celebrating the 3rd anniversary of the Walkman range, the W902 includes Sony Ericsson’s popular Walkman Player with support for numerous file formats including MP3 and AAC, FM radio, shake control which lets users change tracks at the flick of a wrist and expandable memory up to 8GB for storage of up to 8000 songs.

The Sony W902 is made for music. With support for a wealth of file formats, users can simply drag and drop from their PC to the phone via the accompanying PC suite and then listen to and manage all their music on Sony Ericsson’s intuitive walkman player and Shake Control applications.

The Sony Ericsson W902 allows users to enjoy data speeds at an amazing 1.8 MBit/s or 3.6 MBit/s in downlink with this new HSDPA technology. Users can download music, games, video clips and make & receive video calls at the touch of a button.

Users can capture their favourite moments as they happen with the 5.0 mega-pixel camera, flash and autofocus, switch modes and catch the action in sharp digital video. The Sony W902 also offers a huge TFT display making menu navigation, virefinding and web browsing a far more satisfying experience. Users can also add flare to their pictures by connecting their handset to a PC via the handsets USB port and enhancing their photos on their computer.

Initially launched on O2 pay monthly contract deals in the UK, the Sony Ericsson W902 is expected to be released by further network operators in the very near future. This is a phone that will appeal to the traditional Sony Ericsson fan, those that previously fell in love with the W800 series handsets and other candy-bar format phones will enjoy the W902 for its minimalistic design and ease of use.

About Phones Limited:
A price comparison website for the latest mobile phone deals from over 20 leading UK mobile phones retailers and networks resulting in over 200,000 deals compared daily. http://www.phoneslimited.co.uk/