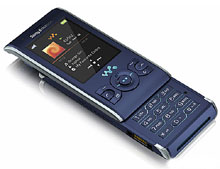 Sony Ericsson have been busy of late releasing a multitude of new Walkman phones, the latest addition to the W-Series range is the new Sony Ericsson W595, a direct upgrade to the extremely popular W580i with enhanced technology, new features and a similar but improved design.

The Sony W595 Walkman phone looks very similar to the previous W580i but its form it more squared and this phone offers the latest Walkman music software and stereo speakers for sharing music whilst with friends.

The Sony Ericsson W595 is a Walkman phone built for sharing, this sliding mobile phone features built in stereo speakers and a stereo Share jack allowing for a second stereo headset so that two people can listen to the music player.

The W595’s Walkman player supports several file formats including MP3 and AAC and with 40mb on board memory expandable further via an M2 slot, users will not be short of places to store their favourite music tracks.

With Shake control activated, press and hold the Walkman key, then flick the wrist – a vibration lets the user know that the track has been changed – a new song from the current playlist is selected randomly then played automatically.

The easy-to-use Walk Mate application stays activated all throughout the day, it keeps track of how many steps walked and how many steps left to reach a daily average health goal. Users simply place their phone in ytheir pocket and they are ready to go.

A built-in FM radio, 3.15 Megapixel camera with support for video recording and a secondary VGA camera for face to face video calling, Bluetooth v2.0 and HSDPA connectivity for high speed browsing and downloads make the Sony W595 a music phone and much more.

The Sony Ericsson W595 offers support for a wealth of file formats, users can simply drag and drop from their PC to the phone via the accompanying PC suite and then listen to and manage all their music on Sony Ericsson’s intuitive Walkman player with Shake Control applications.

The Sony W595 allows users to enjoy data speeds at a substantial1.8 MBit/s (megabits per second) or 3.6 MBit/s in downlink with new HSDPA technology. Users can download music, games, video clips and make & receive video calls at the touch of a button, the W595 also gives access to 3G services such as the latest news and sports headlines, new movie trailers and upcoming music videos.

The Sony Ericsson W595 has been initially made available on Orange pay monthly contract tariffs in the UK, however this new Walkman phone is set to be released on further UK networks in the very near future.

The Sony W595 is a well thought out upgrade to the previous Walkman model, its new features and technology will appeal to the original user base aswell as those seeking a fashionable, functional and fun mobile phone.