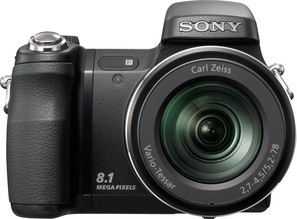 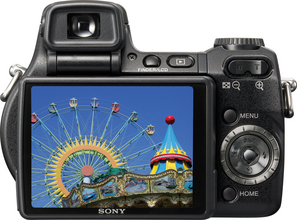 Responding to the growing demand for super zoom digital cameras, Sony is introducing its new 8-megapixel DSC-H9 and DSC-H7 models. Designed to appeal to families with budding athletes in their broods, the cameras debut Sony’s new advanced sports shooting mode.

This mode combines high shutter speed shooting and intelligent continuous auto-focusing. The cameras can quickly focus on fast-moving subjects by predicting where those subjects will be in the frame. This predictive technology also helps to reduce shutter lag, the time it takes for the camera to focus and shoot.

Both cameras feature powerful Carl Zeiss 15x optical zoom lenses for up-close shots of big plays on the field. You won’t miss the look of victory in your champion’s face with Sony’s new face detection technology. It can identify up to eight faces in the camera’s LCD frame, and automatically adjust white balance and flash as well as focus and exposure for correctly exposed, sharp photos.

The Big Game Is Even Bigger In High Definition

Half the fun is playing the game and the other half is re-living the experience by viewing and sharing your photos. Why huddle around the PC to look at pictures when you can impress family and friends with the visual impact of the game in the utmost clarity, color and detail on an HDTV set.

These new cameras feature high-definition outputs. Simply connect them to your HDTV with the Sony VMC-MHC1 high-definition component cable, sold separately, and turn photo viewing into an entertainment experience.

Shoot At The Speed of Life

Even if you’re not at full speed during the soccer match on Saturday morning, the H9 and H7 models will be. These new cameras can shoot up to 1/4000 of a second, a critical speed for capturing fast-moving sports and freezing the action.

Capturing fast action does not have to result in blurry photos. The H9 and H7 cameras incorporate Super Steady Shot optical image stabilization to minimize blur caused by camera shake, an important feature when shooting at slow shutter speeds at full zoom. Their high sensitivity, up to ISO3200, also helps to fight blur resulting from fast-moving subjects.

The H9 camera takes fast-action shooting a step further. It sports a 3-inch, flip-up LCD screen so that you can shoot comfortably from nearly any position. You can hold the camera low to the ground for eye-level shots of kids, without having to contort yourself or crawl on the ground, or hold it high for shots of the crowd. The H7 camera has a non-articulating but large 2.5-inch LCD screen for easy sharing and viewing.

The H9 camera is the only Cyber-shot model in this year’s line to feature NightShot technology. This feature allows you to take photographs in environments with virtually no light so you won’t miss the action, even at a late night game.

Both cameras’ high sensitivity (up to ISO 3200) will also help preserve the mood of your pictures by capturing well-exposed, natural-looking photos, even in challenging low-light conditions. You can shoot at higher shutter speeds to take in the maximum amount of light without using the flash. Picture noise, common to pictures shot at high ISO levels, is minimized by Sony’s Clear RAW ™ noise reduction technology.

The H-series cameras incorporate selectable in-camera editing functions so you can spend more time on the field and less time behind a computer. Equipped with Sony’s Dynamic Range Optimizer, originally developed for the Alpha digital SLR system, the new cameras can analyze captured image data and instantly determine the best exposure and tonality of each picture before JPEG compression.

Other helpful in-camera functions include red-eye correction and photo retouching effects with filters. You can create fun and artistic photos with up to four filter selections, such as the partial color filter that can highlight your star athlete in color while the background of the photo is in black-and-white.

The DSC-H9 and DSC-H7 cameras will ship in April for about $480 and $400, respectively. The VMC-HD1 high-definition component cable will also be available in April for about $40. Additional accessories will include wide and telephoto conversion lenses, filters, batteries, travel chargers, sports packs and cases. All can be purchased online at sonystyle.com, at Sony Style retail stores (www.sonystyle.com/retail), and at authorized dealers nationwide. Pre-orders begin on Feb. 28 at www.sonystyle.com/newcameras.