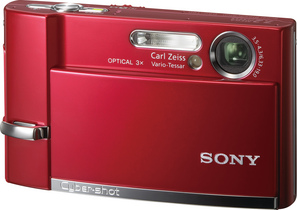 You can use your photos to craft dynamic, personal narratives with in-camera slide shows ‘” complete with your own music and transition effects such as pans, wipes and fades.

“With digital photography, the social interaction that happens when people share their pictures has become as important as making great photographs,” said Phil Lubell, director of marketing for digital still cameras and photo printers at Sony Electronics. “Large, durable, scratch-resistant touch screens with enhanced photo-viewing capabilities are a means to ensuring that photo buffs get the maximum enjoyment out of using their cameras.”

The ultra-slim and stylish DSC-T50 model is the new top-of-the-line camera in the T-series. It is equipped with a seven-megapixel CCD imager, a Carl Zeiss Vario Tessar 3x optical zoom lens, and 56 MB of internal memory. This camera shines with its performance and looks, shipping in bold red, black and silver. With pictures stored on an optional four-gigabyte Memory Stick Duo™ or Memory Stick PRO Duo™ media cards, the camera can play back more than 1,100 high-resolution images in slide show mode. 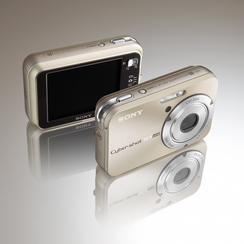 The elegant DSC-N2 camera debuts in champagne gold and is a ten-megapixel powerhouse with an extending Carl Zeiss Vario Tessar 3x optical zoom lens. With its built-in photo album function, this model can be a photo diary in your pocket, loaded with up to 500 of your favorite images.

Every time you snap a picture, the DSC-N2 model will store a full-resolution image on the optional media card or in the camera’s 25 MB of internal memory. Additionally, it automatically resizes that same image in VGA resolution and stores it in a portion of the camera’s internal memory dedicated to pocket album. No matter how many pictures are offloaded from the media card, you can choose to protect the images you want to keep and, over time, you have a collection of your favorite shots in the camera.

Taking great photos with the DSC-T50 and DSC-N2 cameras will be as enjoyable as sharing them. With shutter lag reduced to milliseconds, you can snap away until the whole story is told. Sony’s Real Imaging Processor circuitry delivers fast response times and helps to prolong the life of the cameras’ supplied Stamina InfoLithium batteries — up to 400 shots per full charge for the DSC-T50 model and 300 shots per full charge for the DSC-N2 camera.

Blur the Storylines, Never the Photos

These new models feature blur reduction technologies to help you get the shots you want, even in some of the most challenging conditions.

The Cyber-shot DSC-T50 camera offers Super SteadyShot optical image stabilization to minimize blur caused by shaky hands. Both of the new models incorporate high light sensitivity, up to IS0 1000 for the DSC-T50 camera and IS0 1600 for the DSC-N2 model, to facilitate shooting without blur at faster shutter speeds'” a necessity when capturing fast-moving subjects or taking photos in low-light environments.

You can spark your audience’s imaginations even further with one of Sony’s print and share solutions. Tell your story one snapshot at a time, from the convenience of your own home, with the Sony DPP-FP55 photo printer. Or, order multiple digital prints at www.imagestation.com, have them delivered to your home or pick them up at retail, and weave a yarn that’s sure to impress your family and friends.

The Cyber-shot DSC-T50 camera ships in October for about $500. Optional accessories include the HVL-RLS ring light, used for close-up shots, for about $100, NP-FR1 InfoLithium battery, and LCJ-THA leather carrying case for about $40.

The DSC-N2 model also hits stores in October for about $450. Optional accessories include the MPK-NA marine pack for about $200, NP-FT1 InfoLithium battery for about $50, and LCS-NA leather carrying case for about $50.