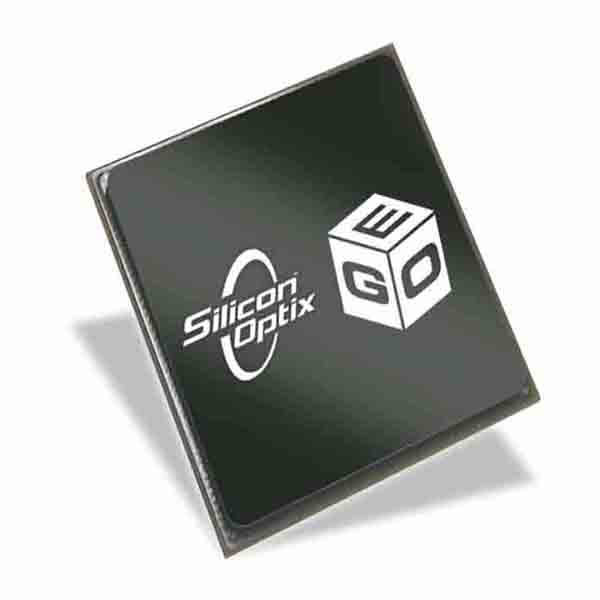 Geo is the first chip to allow for pixel-by-pixel brightness control, thereby ensuring brightness uniformity for large-area LCD panel displays–especially those driven by LEDs, which can vary significantly in brightness. Geo can also correct for a problem, popularly called the “green glob” (pastel-discolored regions), commonly seen in three-panel projection systems.

Geo is the first and only chip to offer three independent geometry-processing channels capable of high-precision, pixel-by-pixel processing capable of digitally achieving lateral chromatic aberration correction, one of the big cost adders in optical system designs.

With Geo, optical problems such as lateral chromatic aberrations, optical distortion, and three-panel misconvergence can be corrected electronically, eliminating the need for more expensive optical and mechanical solutions. Geo’s sophisticated array of adjustments will, for the first time, free designers to create inexpensive RPTVs with cabinet depths that rival those of today’s popular flat-panel LCD and plasma displays–with much less weight and power consumption. Video wall systems with multiple display elements, each of which may have a different brightness, can now be balanced for a more seamless appearance.

“Picture a 55-inch rear-projection TV with a depth of just 5 inches, weighing half of what an LCD or plasma weighs and consuming a fraction of the power. That’s what’s possible with Geo,” said Paul Russo, Chairman and CEO of Silicon Optix. “Geo is going to revitalize the RPTV segment and solve common image-quality problems that have plagued projectors forever. Geo also solves the brightness-uniformity issues associated with LED-driven LCD displays, and the color-uniformity issues associated with three-panel projection systems.”

Better Picture and Lower-Cost Optics
A complete “system on a chip,” Geo incorporates three high-precision geometry-correction engines, one for each color channel (red, green, blue). Each channel has independent adjustments to compensate for pincushion/barrel distortion, keystone distortion, and rotational misalignment.

By correcting common picture problems digitally instead of optically, Geo improves performance and reduces costs. Optical assemblies can now be designed using less expensive glass, simpler lens construction, and fewer lens elements. In addition, optical designers can concentrate on optimizing parameters such as MTF and lens-element count instead of distortion and lateral color shift, as the latter can be corrected digitally–resulting in both lower cost and better image quality.

Geo’s benefits are not restricted to rear-projection applications. When used with a zoom lens, such as those typical on business and home-theater front projectors, Geo can dynamically correct for the varying levels of distortion and lateral chromatic aberration produced as the focal length varies. Because Geo adapts, the lens doesn’t have to, which means it can be built using simpler, less costly mechanical elements.

Per-Pixel Brightness Adjustments for LCD Panels and Projectors–An Industry First!
Geo is the first chip to provide per-pixel adjustments to eliminate hot spots (light intensity falling off from the center of the image or bright patches within the image) and color non-uniformities, two image-quality problems that are endemic to front and rear projectors.

When implemented in flat-panel LCD displays, Geo’s ability to separately adjust the brightness of each pixel enables the chip to accurately compensate for the light-output non-uniformities that plague such displays, and yield significant improvements in image quality.

Digital RPTV Alignment–Another Industry First!
Final alignment of RPTVs by mechanical means slows the manufacturing process, adds extra cost, and can produce inconsistent results. The alignment can also change during shipping and handling, leading to an expensive in-home service call, or even to the return and replacement of the entire set.

Geo is the first chip that permits electronic alignment of RPTVs. Digital alignment is not only much faster and more precise than manual alignment, it also permits post-delivery alignment in the consumer’s home through the use of special front-panel or remote-control functions.

The Geo chip has begun sampling and will be available in volume in late Q1, 2007.

About Silicon Optix
Silicon Optix is the leader in programmable, high-performance video processing and unique and proprietary geometry-processing IC solutions delivering Hollywood Quality Video (HQV). Silicon Optix ICs can be found in top-tier consumer-electronics products such as high-resolution displays, premium DVD players, ultra-thin RPTVs, and front projectors. Teranex, a division of Silicon Optix, is a leader in programmable video-processing systems-level solutions for the professional broadcast and post-production markets. Silicon Optix is headquartered in San Jose, California, with offices around the world. For more information, visit www.siliconoptix.com, www.teranex.com, and www.hqv.com.