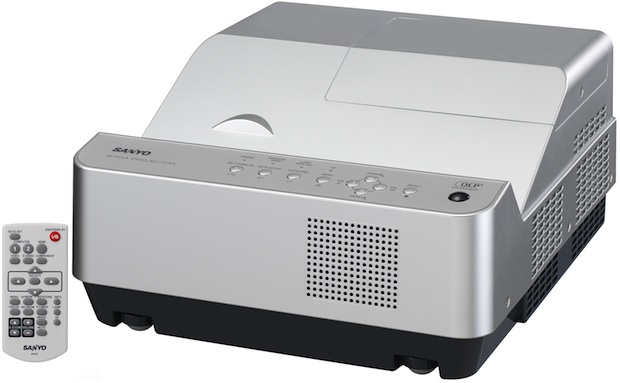 SANYO’s new ultra short-focus 3D Ready projector will be available in July 2010. The new model also offers the world’s shortest projection distance, and can be set up vertically or horizontally for enjoying “large images projected from right on the wall.”

In 2006, SANYO was the first in the industry to come out with an ultra short-focus projector that can project a large image from a short distance, thereby expanding the situations where projectors can be used. In 2007, SANYO also released the LP-XL50 projector with an ultra short-focus lens, which revolutionized the conventional projector concept with the world’s shortest set-up distance. This model has been well received in educational settings.

The new PDG-DWL2500J model represents a further advancement of the LP-XL50, and have a compact design that is about half the size of the conventional model. Along with being able to project large images from an even shorter distance, the new models have 3D ready, a feature that is rapidly gaining popularity.

As a result, SANYO is aiming to expand the market for these projectors from the conventional educational market to include new uses including amusement applications.

Compact design that is half the size of a conventional model, for saving space of the floor or other installations

In recent years, numerous 3D films have been shown in movie theaters, and the demand for 3D TVs and other 3D content is expected to expand rapidly. With the advent of 3D personal computers, there is also increased interest in 3D monitors for the education, digital signage, and amusement markets.

In order to respond to this market trend, the PDG-DWL2500J projector is equipped with 3D Ready, while offering the world’s shortest projection distance. They also feature a compact design that is about half the size of a conventional model, and can be set up vertically or horizontally to save space, thereby increasing the usage situations.