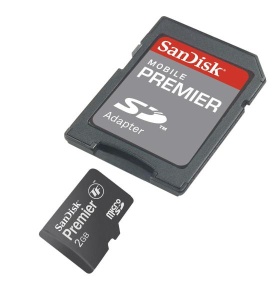 SanDisk Corporation (NASDAQ:SNDK) today introduced SanDisk Mobile Premier, a new line of performance-oriented microSD™ memory cards aimed specifically at the mobile phone market. The cards allow consumers to quickly transfer content to and from their mobile phones as well as increase storage for videos, music, ring tones, digital images and other files. Also, SanDisk Mobile Premier cards feature SanDisk’s TrustedFlash™ technology, which allows network operators to sell premium content that can be downloaded directly to mobile phones, stored on the cards and played on other TrustedFlash-enabled devices authorized by the network provider.

The announcement was made at the CeBIT Show, where SanDisk is exhibiting its products in Hall 23, Stand B28.

SanDisk Mobile Premier microSD cards will be offered in 1- and 2-gigabyte (GB)(1) capacities, with suggested retail prices of $53.00 and $82.00, respectively. The fingernail-size cards, which come with an adapter to fit standard SD™ card slots, are slated to be available this spring at many of the more than 200,000 stores worldwide where SanDisk products are sold.

“SanDisk Mobile Premier, our top-of-the-line mobile card, is designed to take advantage of the latest and greatest features of new handsets that have built-in digital photo and video capture, MP3 music playback and other memory-intensive elements including new security capabilities,” said Jeff Kost, vice president and general manager of the Mobile Consumer Solutions division at SanDisk. “This year, according to analysts’ projections, nearly half of all mobile phones sold are expected to have card slots, and the microSD has become the preferred format for manufacturers.”

Here are the key advantages of SanDisk Mobile Premier cards:

— Using a card reader or cable attached to a PC, consumers can side-load music tracks, images and videos to/from a SanDisk Mobile Premier card more rapidly than with a standard card. Read/write speeds are 10 and 9 megabytes (MB) per second, respectively(2).

— Since most mobile phones have limited on-board memory, the SanDisk Mobile Premier card will allow users to store more songs, still images, videos and other content on their handsets. For example, a 2GB Mobile Premier card can store 500 MP3 songs for about 32 hours of playback time(3).

All SanDisk Mobile Premier cards are based on the TrustedFlash platform, which can allow users to play back premium content on any TrustedFlash enabled device within the network. Mobile network operators and other content providers can use TrustedFlash technology to produce preloaded memory cards as well as store content, such as music and ring tones, that is purchased online.

Among supporters of the TrustedFlash platform, the i-mode(4) Alliance, which is comprised of network operators outside of Japan, has endorsed the technology for its members. And Bouygues Telecom, a network operator in France, is leading the implementation of TrustedFlash-enabled products in Europe by bundling SanDisk Mobile Premier cards with new handsets. Customers of i-mode Alliance members using TrustedFlash technology can access entertainment and other content from a variety of providers.

The TrustedFlash platform can be used in flash memory cards, USB flash drives and mobile phone SIM cards. It provides security solutions for digital entertainment and e-commerce applications, as well as for enterprise and personal data. Created by SanDisk, TrustedFlash technology extends the trusted environment from the device to removable memory — allowing rights holders, mobile network operators, application developers and device manufacturers the ability to offer consumers content portability among TrustedFlash-enabled devices within an operator’s network or environment.

(4) i-mode is available to roaming users in the USA but is not provided by any mobile operator in the USA.