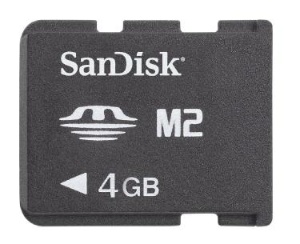 SanDisk Corporation (NASDAQ:SNDK) today announced the availability of the 4-gigabyte (GB)(1) Memory Stick Micro™ (M2) card. With the capacity to hold up to 1,000 MP3 songs, 9,600 high-resolution photos or up to 20 hours of MPEG4 video(2), the 4GB M2 is compatible with Sony Ericsson’s latest generation of slim line, multimedia mobile handsets such as the Cyber-shot™ and Walkman series.

“Music, video, photos, games–these are the types of content driving the need for higher capacity cards such as the 4GB M2,” said Jeff Kost, vice president and general manager of the Mobile Consumer Solutions division at SanDisk. “This trend is expected to grow as consumers embrace the mobile lifestyle and demand more storage-intensive features from a single mobile device.”

The 4GB M2 card has a suggested Canadian retail price of $119.99 The new card is expected to be available worldwide in mid-June at many of the more than 210,000 consumer electronics stores and retail outlets where SanDisk products are sold.

SanDisk is the original inventor of flash storage cards and is the world’s largest supplier of flash data storage card products, using its patented, high-density flash memory and controller technology. SanDisk is headquartered in Milpitas, California, and has operations worldwide, with more than half of its sales outside the U.S.