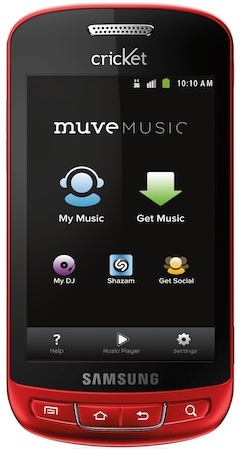 Cricket announced the Android-powered Samsung Vitality (model SCH-R720) smartphone which is enabled to use their Muve Music service.

Other key features include:

Muve Music is the first unlimited music service to be included as part of a wireless rate plan and now has more than 200,000 customers. By applying its philosophy of unlimited services and value innovation, Cricket and Muve Music have given their customers a new music experience that ranks high in customer satisfaction.

Price and Availability
The Samsung Vitality is available now for $219.99.

Note: This phone is also known as the Samsung Admire at MetroPCS.