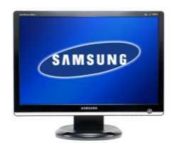 DisplaySearch, the worldwide leader in display market research and consulting, indicated in its latest preliminary figures for its Quarterly Desktop Monitor Shipment and Forecast Report that Samsung was the world-wide market share leader for LCD desktop monitor shipments in Q3’07, knocking Dell from the top quarterly market share position for the first time since Q4’01. Dell had enjoyed the top market share position for LCD monitor sales every quarter since Q1’02, and was at the forefront of the CRT to LCD transition offering aggressively priced products, leading edge technology and a diverse portfolio of products to its customers. As one of the top desktop PC vendors in that period, Dell began aggressively helping the market move from a CRT-based standard to an LCD-based standard by offering LCD monitors as part of its typical PC plus Monitor bundle.

The re-emergence of stand-alone monitor brand Samsung as the world-wide leader in LCD monitor shipments shows that the market is again in a new upgrade cycle for displays alone. “The catalyst for growth in the LCD Monitor market in recent quarters has not been the overall growth in the desktop PC market,” noted Chris Connery, vice president of Market Research for DisplaySearch. “Growth in the annual $42B desktop display industry has been fueled by a new display replacement cycle. End-users are upgrading their displays not from CRTs to LCDs as they might have begun doing in 2002, but from smaller LCDs to larger and wider LCDs.”

Samsung’s move to the top market share position is similar to the early stages of the LCD monitor industry. From 1999-2001, stand-alone monitor companies such as NEC, NEC-Mitsubishi, Hitachi and Samsung were LCD monitor market share leaders as end-markets looked to these display-centric companies for their initial upgrade needs from CRTs to LCDs until price points were low enough that PC companies such as Dell and HP began to aggressively market PC plus LCD Monitor bundles.

In the current market of display-only upgrades, consumers and smaller businesses have been fueling world-wide growth since these buyers are less concerned about institutional standards and legacy compatibility. Dell’s major customer base–larger corporations, educational institutions and government agencies–has been slow to refresh their PCs and the displays along with them due to infrastructure concerns and the recent introduction of a new operating system. Additionally, growth markets such as China, where Dell is not as strong, do not have a heavy IT infrastructure restraining institutional buying, which helped the overall world-wide market grow 28% Y/Y.

Dell’s customer base is less willing to adopt newer technologies due to legacy infrastructures and has been slower to recognize the potential usability gains associated with wide-screen displays, so they have not updated corporate standards from 17″ SXGA or 19″ SXGA displays. This was problematic for Dell, particularly in the past quarter, as its panel-vendor sources continued to shift to wide-screen displays. While this supply disconnect has seemingly reached a new peak, it could continue until commercial purchasers go through a complete PC refresh cycle, slated by many to begin in 2008, when they change from Windows XP over to Vista and thus will change their software and hardware standards together, becoming more receptive to the new crop of wide-screen displays.

While Dell struggled with its supply base to allocate production towards displays that are being demanded by its existing customer base, Samsung has continued to focus on wide displays as their key offering, heavily pushing and promoting larger wide displays to consumers and small business alike. While growth for the LCD Monitor market in Q2’07 was fueled mainly by increased shipments into China, growth in Q3’07 came mainly through growth of LCD monitor shipments into EMEA, a wave which Samsung rode as well.

The world’s largest market for LCD monitors in Q3’07 remained the EMEA region with LCD monitor shipments up 20% Q/Q. Samsung enjoyed an even stronger growth rate in this region for the quarter, with shipments up 37% Q/Q. LGE and Acer shipments into EMEA grew 21% and 20%, respectively, so the top three vendors for EMEA were primarily stand-alone monitor vendors clearing showing the swing in demand from the “bundle” to stand-alone upgrade. Dell was the only vendor in the top five that decreased shipments into EMEA, down 2% Q/Q.

Dell did improve its supply mix for wide displays and seems to be ready to demonstrate to its current and emerging customer base that wide displays have benefits well beyond enhanced DVD viewing or video game playing, scenarios which have little relevance in the work environment.

As institutional buyers begin to accept and appreciate the potential workplace productivity benefits of wide displays and begin to recognize the cost and production efficiencies associated with the production of wide display panels, it is anticipated that bundle growth rates for wide displays in commercial settings will become the norm in future quarters.

Additionally, Q3 is typically a weak quarter for Dell sales due to its predominantly direct business model. Since market share is measured on a ship-out basis, other vendors typically see a stronger Q3 in terms of sequential growth as they fill their regional pipelines (both their own regional stock as well as that of their retail and distribution partners) in preparation for the strong Q4 selling season. While Dell continues to evolve its business model to embrace indirect consumer channels through partnership with the US’s largest retailer Wal-Mart and through Gome, one of the largest retailers in China, most of its shipments in Q3’07 were still representative of same-quarter market demand due to its continued reliance primarily on direct distribution.

About DisplaySearch
DisplaySearch, an NPD Group company, has a core team of 57 employees located in Europe, North America and Asia who produce a valued suite of FPD-related market forecasts, technology assessments, surveys, studies and analyses. The company also organizes influential events world-wide. Headquartered in Austin, Texas, DisplaySearch has regional operations in Chicago, Houston, Kyoto, London, San Diego, San Jose, Seoul, Shenzhen, Taipei and Tokyo, and the company is on the web at http://www.displaysearch.com/.