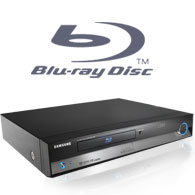 Samsung Electronics America, Inc. announced that the industry’s first Blu-ray disc player has been shipped to retailers in the U.S. market for availability on June 25th. The Samsung Blu-ray disc player (BD-P1000) has been eagerly awaited by consumers anticipating the opportunity to view High Definition discs on their existing HDTVs. Blu-ray is the next generation disc format which offers close to five times the resolution of conventional DVDs making it the highest picture quality available on the market. The format is supported by many of the leading movie studios, including Sony Pictures Home Entertainment (SPHE) and LionsGate Pictures which will release Blu-ray content this month. The innovation marks the latest technology breakthrough brought to market by Samsung and further underscores the brand commitment to offering consumers the ultimate home theater experience.

“The emergence of Blu-ray is an enormous boon for HDTV owners, video enthusiasts, and for those who actively seek the best picture and sound possible in their home theater,” said Jim Sanduski, Senior Vice President of Marketing for Samsung’s Audio and Video Products Group. “Until now, there hasn’t been a pre-recorded media solution for consumers to take full advantage of the pristine picture their HDTVs are capable of producing. As the first company to deliver a Blu-ray player in the U.S. market, Samsung has reinforced its commitment to provide our consumers with the most riveting and innovative home theater experience possible.”

Blu-ray is the premier next generation optical disc format and is supported by more than 170 of the world’s leading consumer electronics, personal computer and media manufacturers. While current optical disc technologies such as DVD, DVD±R, DVD±RW, and DVD-RAM rely on a red laser to read and write data, the new format uses a blue-violet laser which better utilizes the space on the disc allowing more than five times the amount of information.

The Samsung BD-P1000 plays Blu-ray software titles at the highest resolution available via a native 1080p HDMI output for films digitally mastered in 1920 x 1080p. The BD-P1000 also up-converts conventional DVDs to 1080p through the HDMI digital interface so the picture quality of any traditional DVD will look noticeably more detailed when used with the disc player. The BD-P1000 is backwards compatible and plays both standard DVDs and CDs in addition to supporting all DVD formats including, DVD-RAM, DVD-RW, DVD-R, DVD+RW, and DVD+R.

Additionally, Samsung has included a 10-in-2 multi memory card interface that supports all the major formats including Compact Flash, Secure Digital, XD Picture Card, Memory Stick (all TM) and others. By including a memory card interface into the Samsung BD-P1000, the native high definition resolution contained in 2-megapixel and larger digital still pictures can be fully rendered on a high definition television via slide show functionality built into the player.

Connectivity includes HDMI, Component, S-video and composite outputs. Supported audio formats include: Dolby Digital & Dolby Digital Plus, DTS, MP3 and 192KHz LPCM. The BD-P1000 will be available in stores on June 25, 2006 at a MAP of $999.99.

The launch of the Samsung BD-P1000 coincides with a major influx of Blu-ray content. Seven of the eight major movie studios have already announced titles for Blu-ray, with the initial line-up of recent hits as well as classics, expected to grow to more than 200 titles by year end.