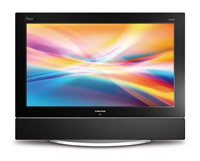 The new backlight technology provides the P32L1 and P42L1 with broader chromaticity than CCFL-backlit sets — that is, a wider color range, helping them to present the best picture quality available. LED backlighting also offers a number of additional advantages over CCFL technology. It promises to last longer, it displays no distortion, it possesses greater translucency, it weighs less and consumes less power, and it uses no mercury, making it ecologically friendlier.

In addition to the LED backlight, the TVs are packed with premium features. These include sharp, clear, progressively scanned 1080p HD resolution for the 42-inch P42L1, 720p resolution (1366 x 768 pixels, WXGA) for the 32-inch P32L1, built-in digital and analog tuners, and HDMI inputs. Their widescreen, movie-style aspect ratio is augmented by conventional 4:3, 16:9 Zoom, and Panoramic display modes.

Proton’s 10-bit processing technology enables the sets to deliver up to 1.07 billion colors, 64 times more than conventional 8-bit processors, as well as a gray scale that’s eight times more expansive. The result is a superior natural picture that surpasses those from its competitors. A pair of dual-picture functions — Picture-in-Picture and Picture-on-Picture — provide alternative ways to watch TV. Significantly, the 32-inch P32L1 does not use a fan for cooling, while still maintaining a low internal temperature under 122 degrees Fahrenheit.

The Puriti Advantage
Both sets are equipped with the sixth generation of Proton’s exclusive Puriti video enhancement technology. Puriti-enhanced LCDs possess a wider color range than conventional LCD or CRT displays. A built-in artificial intelligence system analyzes color frequencies and intensity to assure the screen displays the most natural skin tones and the best blacks by compensating for picture detail lost to poor contrast.

A frame of extruded aluminum with a thin silver outer edge and a black inner frame, both hairlined, add elegance and structural strength to the design. The sleekly styled sets will offer dealers and consumers alike the benefits of a visceral, visual viewing experience that stands above the rest.

Proton’s P32L1 and P42L1 LED BLU LCD TVs will be available in the second quarter of 2007. They can be seen with Proton’s other outstanding LCD TVs in Booth 21926, South Hall 1, Las Vegas Convention Center, during the show.

About Proton
Founded in 1974, Proton Electronic Industrial Co. is a leading manufacturer of high-quality digital TV, LCD TV and HDTV products. Each Proton television combines forward-thinking industrial design with the most advanced electronic engineering available. The result is a line of televisions that regularly win the admiration — and – awards — of the industry’s leading video and Home Theater institutions. For further technical information, visit Proton’s Web site at www.protonav.com.