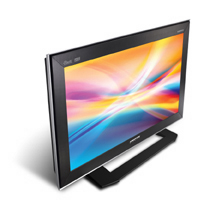 For 32 years, Proton has made television products that were recognized by independent technical experts as superior to the industry’s standard. In the past, Proton made these accolades known to the public by the advertising slogan “Clearly the Best,” a description that has remained unchanged, since Proton’s product remains Clearly the Best.

Now Proton’s rigorous engineering focus on leading technology has given birth to the Proton Premier line, which might well be called “Better than the Best” because it incorporates every leading edge technology, regardless of cost. Consumers willing to pay for technology well ahead of the field, ahead of anything else available, will want Proton Premier.

A frame of extruded aluminum with a thin silver outer edge and a black inner frame, both hairlined, adds elegance and structural strength to the design. The sleekly styled sets will offer dealers and consumers alike the benefits of a visceral, visual viewing experience that stands above the rest.

Proton’s 47- and 42-inch P47D5 and P42D5 LCD TVs are available now from authorized Proton dealers at suggested prices of $2,999 and $1,999, respectively. They can be seen with Proton’s other outstanding LCD TVs in Booth 21926, South Hall 1, Las Vegas Convention Center, during the show.

About Proton
Founded in 1974, Proton Electronic Industrial Co. is a leading manufacturer of high-quality digital TV, LCD TV and HDTV products. Each Proton television combines forward-thinking industrial design with the most advanced electronic engineering available. The result is a line of televisions that regularly win the admiration — and – awards — of the industry’s leading video and Home Theater institutions. For further technical information, visit Proton’s Web site at www.protonav.com.

Advertisement. Scroll to continue reading.
# # #
You Are Here