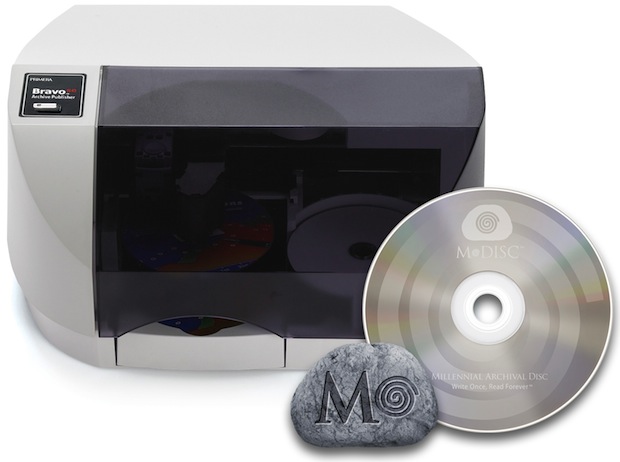 Write Once, Read Forever™
Instead of burning data into organic materials as on dye-based DVD recordable media, Millenniata’s M-DISC™ media is constructed of stable, rock-like materials that are known to last for centuries. Once data is written to M-DISC media it can be read back on current DVD drives. Both printable-surface and standard non-printable M-DISC media is available.

Primera’s disc publishers automate the process of producing archival discs. The included PTPublisher™ software makes it fast and easy to archive photos, videos, documents, audio and music and virtually any other digital information. In addition, a comprehensive Software Developer’s Kit (SDK) is available at no charge. The SDK makes it easy for developers to integrate Primera disc publishers into applications such as video and film archiving, Digital Asset Management (DAM), document and medical imaging and much more.

“We’re excited to offer this breakthrough technology from Millenniata in our new Bravo Archive-Series Disc Publishers,” said Mark D. Strobel, Primera’s vice president of sales and marketing. “It’s not a typo — the life of this media is really expected to be one thousand years or more. For backing up critical digital video assets, documents and a wealth of other data that simply must be preserved forever, there is nothing else like it available.”