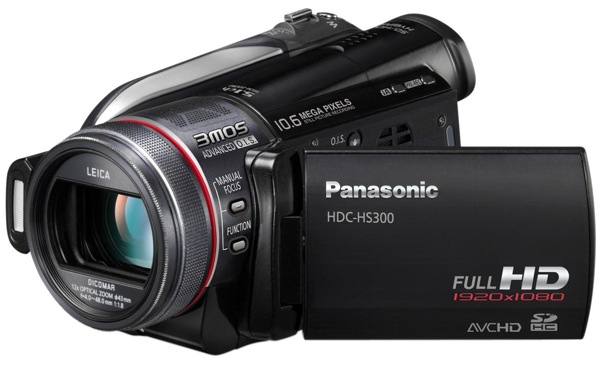 Panasonic expanded its 2009 High Definition (HD) camcorder line with three new semi-professional full-HD models. The HDC-HS300, HDC-TM300 and HDC-HS250 are more advanced and feature a newly developed 3MOS chip system. Each model features Panasonic’s first camcorder touch-screen that allows icons displayed on the LCD to be easily operated by touching them with a fingertip.

Panasonic’s new 3MOS system, available in the HDC-HS300, HDC-TM300 and HDC-HS250, assures high image quality for both motion and still images by using three full-HD MOS sensors to provide the world’s highest total pixel count of 9,150,000 pixels (3,050,000 pixels x 3)*. These three semi-professional camcorders are equipped with a newly developed, large-aperture Leica Dicomar lens (filter diameter: 43 mm) and a 1/4.1-inch image sensor. They also record still images with a 10.6-megapixel resolution and feature an 8.3-megapixel resolution for still images when simultaneously recording with video. The HDC-HS300, HDC-TM300 and HDC-HS250 have a luminance of 1.6 lx, allowing them to shoot video in very low-light conditions.

“More and more, we are moving towards a High Definition lifestyle, and Panasonic’s camcorders are no exception,” said Dennis Eppel, Vice President, Network Business Group, Panasonic Consumer Electronics Company. “With the introduction of six new models, we are answering a consumer demand to record videos in High Definition quality that are ready for viewing on High Definition TVs. We also recognize that not all users are the same — so we are introducing HD models appropriate for both advanced and new users alike.”

The HS300/TM300 models come equipped with a manual ring, an electronic viewfinder and a microphone terminal — all ideal for semiprofessionals looking for more expressive video shooting. These models allow delicate and precise fingertip control of the zoom, focus, aperture, shutter speed and white balance. The HDC-HS250 was designed to be a compact HD camcorder and is virtually identical to the HS300/TM300 models in camera performance, but without the manual functions and electronic viewfinder, thus providing the same high image quality, but in a smaller body for those who want high-quality shooting in a portable body.

Suggested retail prices for all camcorders are as follows:

All models come in black and will be available in April 2009.