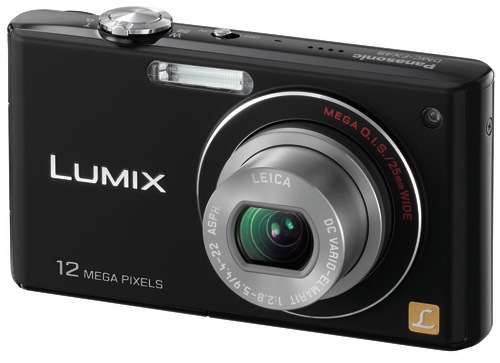 Panasonic today expanded its popular LUMIX FX digital cameras series with the introduction of the 12.1-megapixel DMC-FX48, which features a 25mm ultra-wide-angle LEICA DC lens and a powerful 5x optical zoom (equivalent to 25mm to 125mm on a 35mm film camera), yet its slim profile makes it convenient to slip into a pocket. With a 25mm ultra-wide-angle lens and 5x optical zoom, users can capture nearly double the viewing space at the same shooting distance compared to standard 35mm cameras, thus the FX48 can photograph images with great width and depth. The FX48 also features Face Recognition, a new technology to Panasonic’s proprietary advanced iA (Intelligent Auto) mode.

“With Panasonic’s acclaimed FX-Series, we are pursuing high photo quality in a camera body that is sophisticated, easy-to-carry and intuitive to use,” said David Briganti, National Marketing Manager, Imaging, Panasonic Consumer Electronics Company. “With features like Face Recognition and High Definition video capability, we are packing advanced and powerful features into a small, attractive camera that can easily be carried in a pocket or purse.”

The FX48 features iA mode, a system of technologies, such as MEGA O.I.S., Intelligent ISO Control, Face Detection, Auto Focus (AF) tracking1, Intelligent Exposure and Intelligent Scene Selector, that engage automatically, without the user having to adjust any settings. New in 2009, Panasonic’s advanced iA adds Face Recognition, a feature that recognizes individual faces, making it a “personal verification system” in the digital camera. With the Face Recognition feature, a user can give AF and auto exposure priority to a single person in a group, ensuring that a particular person’s face will be focused and exposed beautifully.

With Face Recognition, when a familiar face is recorded several times, the camera will prompt the users to register the face. Once registered, if the familiar face appears in the frame again, the camera will display the name specified for that person and prioritize focus and exposure so that the registered face is bright and sharply focused2. During registration, the user can change the icon that indicates when the registered subject is in focus and the person’s age can also be registered. When children less than three years-old are registered, the camera will automatically switch to the Baby scene mode when the child is in the frame. Furthermore, in playback, users can choose to display only photos that contain a specific registered face using Category Playback, so organizing and archiving photos by person becomes much easier.

The DMC-FX48 can also record High Definition (1280 x 720p) motion images at 30 fps. And, using the DMW-HDC2 component cable (optional accessories), the video can output directly to a television, such as a Panasonic VIERA HDTV, for easy playback.

Other features of the Panasonic LUMIX DMC-FX48 include:

The DMC-FX48 will be available in silver and black models starting in April 2009 for a suggested retail price of $349.95. For more information, please visit www.panasonic.com/lumix.