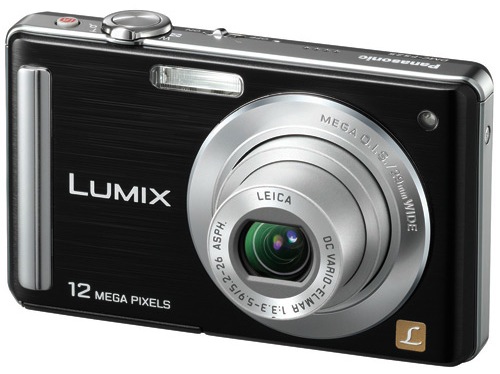 Panasonic today announced the DMC-FS25 as its newest addition to the LUMIX FS-Series of digital cameras. The 12.1 megapixel DMC-FS25 features a 5x optical zoom and a 29mm wide-angle LEICA DC VARIO-ELMAR lens, a 3.0-inch intelligent LCD and is the top-of-the-line FS-Series model. The LUMIX FS models, a stylish sister-line of the highly-acclaimed LUMIX FX-Series, combine easy operation with a sleek look, enabling both beginner and advanced users to take beautiful digital photos with a camera that slips in a pocket.

Panasonic has enhanced the Intelligent Auto Mode (iA) on the DMC-FS25 from the previous FS models to now include AF tracking and Intelligent Exposure functions in addition to the standard Mega O.I.S., Intelligent ISO Control, Intelligent Scene Selector and Face Detection. AF Tracking enables the user to “lock” the focus onto a moving subject*1. The camera then automatically tracks the subject as it moves, keeping it in focus without the need to hold the shutter button halfway down. Additionally, Intelligent Exposure helps capture natural-looking images by suppressing blocked shadows and blown highlights. It continually monitors the light source in the shooting environment and automatically activates the backlight compensation function if it detects the subject is backlit.

The newly added dedicated iA button on top of the camera enables the user to enter iA mode directly without the need for entering the menu. This allows the user to automatically shoot in iA mode any time the conditions change without adjusting the camera’s settings.

Other features of the DMC-FS25 include a Venus Engine IV image processor, which provides an advanced signal processing system and a shutter release time lag as short as 0.006 seconds. The Venus Engine IV also supports a High Sensitivity mode that lets the camera record at a setting of up to ISO 6400, sensitive enough to capture subjects in near-total darkness without using a flash.

An intelligent 3.0-inch LCD screen detects light conditions and automatically adjusts the brightness levels for viewing in sunlight conditions and dark places. It also helps to preserve battery life. Menus are clearer and easier to navigate with the Display Size option. The new Photo Frame mode lets the user put attractive borders around photos, so when printed, they look like postcards in picture frames. Also, the new My Scene setting lets users assign their most frequently used Scene modes to the setting, so they can easily access that scene instantly. The DMC-FS25 records WVGA (848 x 480) motion pictures at 30 frames per second in 16:9 wide-screen format, as well as standard VGA (640 x 480) format.

Other features of the LUMIX FS25 include:

1 Dynamic tracking function may fail to lock, lose the subject in AF Tracking, or track different subject depending on the recording conditions.