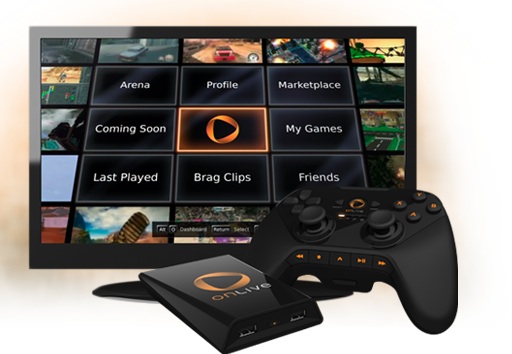 The OnLive Game System delivers instant-play, high-end, new-release video games to TVs for the first time. Now players of all skill levels can enjoy games in the comfort of their living rooms — instantly and on-demand — without ever having to bother with discs, downloads or updates.

The sleek, pocket-sized OnLive MicroConsole TV adapter, backed by high-performance Internet-based (cloud) game servers, delivers an unprecedented gaming experience, launching top-tier games in seconds instead of the minutes they take to start on high-end consoles or PCs. Whether players are checking out a demo, joining a premium multiplayer game or watching people from around the world play games live, with the OnLive Game System it's as effortless — and as fast — as changing channels.

The OnLive MicroConsole hookup is simple: Connect it to a broadband Internet connection and a TV. Within minutes, players will have instant access to OnLive's growing Marketplace of premium, new release, indie and classic game titles.

Also included in the OnLive Game System is the OnLive Wireless Controller, ergonomically crafted to minimize fatigue and weighted for balance. Designed for the video-rich OnLive environment, exclusive OnLive media controls provide one-touch Brag Clip video recording, as well as the ability to pause/play, rewind and fast-forward through videos. Up to four OnLive Wireless Controllers as well as an optional keyboard and mouse can be used simultaneously.

35 Top Games Available At Launch; New Titles Coming Soon
At launch, the OnLive Game System will have more than 35 games available to demo, rent or purchase instantly from great publishers, both large and small. A sampling of games includes: Borderlands®: Game of the Year Edition, Just Cause® 2, Mafia® ll, NBA® 2K11, Shaun White Skateboarding and many more. OnLive Game System users can also play their games on a PC or Mac® via a small browser download.

OnLive users can test-drive any game for free, and then keep playing by instantly converting to a 3-day or 5-day rental or a Full PlayPass. With rentals from $3.99 to $8.99 and Full PlayPass options from $4.99 to $49.99, OnLive offers a wide range of games, from creative indie titles to top-tier premium titles released the same day as consoles. 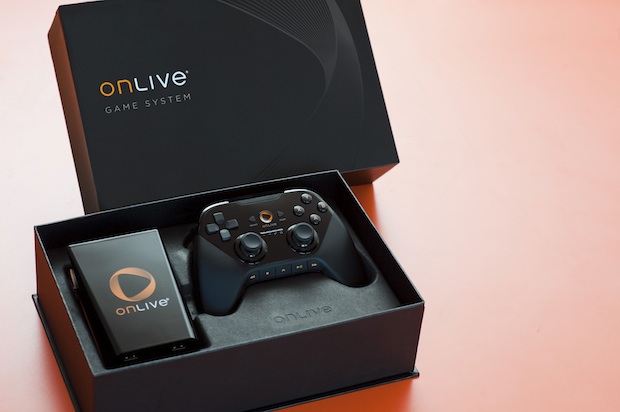 In addition to its rental and Full PlayPass plans, later this year OnLive will add a monthly flat-rate plan, providing unlimited access to a broad library of big studio games and indie titles.

“The OnLive Game System marks the start of a new era for video games and home entertainment. Not only is the OnLive Game System the fastest, simplest way to play, watch and test-drive top-tier games instantly on the living room big screen, it also opens the door to a new world of options for gaming and entertainment — from media-rich social networking and massive spectating to game portability across TV, PC, Mac® and mobile devices.”
— Steve Perlman, OnLive Founder and CEO

“Because MicroConsole performance and features are defined by OnLive's continually upgraded cloud-based servers, the OnLive Game System experience steadily improves with time. We designed it to deliver state-of-the-art gaming in every way — to not only deliver a great user experience for the games of today, but also for the games of tomorrow.”
— Joe Bentley, OnLive VP of Engineering

“Just as OnLive is bringing innovation to the gameplay experience, we are bringing innovative pricing models to the marketplace that offer extraordinary access to great games to fit any budget. OnLive is about instant play anywhere at a great value. With OnLive, you Just Play.”
— John Spinale, OnLive VP of Games and Media

About OnLive
OnLive is the pioneer of on-demand, instant-play video game services, delivering real-time interactive experiences and rich media through the Internet. With groundbreaking video compression technology, OnLive harnesses cloud computing to provide the power and intelligence needed to instantly deliver the latest, premium game titles to any HDTV via the OnLive Game System or nearly any PC and Mac via a small browser download. OnLive technology is backed by hundreds of patents and patents pending. The company is headquartered in Palo Alto, Calif. OnLive investors include Warner Bros., Autodesk, Maverick Capital, AT&T, British Telecommunications (BT) and The Belgacom Group.

Destructoid10 years ago
You Are Here