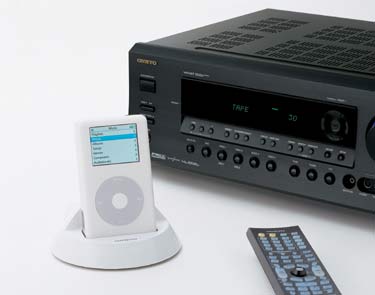 UPPER SADDLE RIVER, NJ (5/25/05) — Onkyo has introduced its DS-A1 Remote Interactive Dock to provide seamless integration of iPod audio playback and photo display with millions of the company’s home entertainment systems, including the ability to control these functions with the existing Onkyo remote control.

While there are many adapters available to link iPod music to a home entertainment receiver, Onkyo’s Remote Interactive Dock adds the ability to operate key control functions using the receiver’s remote control. This allows Apple Computer’s iPods to function as a part of the home entertainment system as easily as if they were a home CD player or other traditional audio component. Because it employs the company’s long-running RI system, the DS-A1 dock is backwards-compatible with most of the Onkyo components manufactured in the past decade.

“The incredible success of the iPod has led to a revolution in the way people access their music and photos,” said Onkyo USA National product and Marketing Manager Don Milks, “and right now the entire industry is scrambling to accommodate these units in their future products. When we introduced the technology 10 years ago, we certainly weren’t thinking of the iPod, but the extreme flexibility of the RI system made it relatively simple to adapt it to this new technology. This simple add-on device will let millions of consumers integrate their iPods with the Onkyo equipment they already own.”

The Onkyo RI system enables users to operate an entire system of the company’s components with a single remote control. The DS-A1 dock provides a complete interface between these Onkyo audio/video components and the iPod. With the iPod placed in the dock, it becomes a source component for not only audio playback, but also for photography stored in iPod photo units. Basic iPod controls such as play, pause, stop, skip, and shuffle / repeat functions can all be operated via the Onkyo system remote controller. Additionally, the dock is capable of recharging the iPod batteries while it is in use.

The rear of the DS-A1 includes high quality stereo analog and S-Video connections, delivering the audio and video signals from the iPod to the Onkyo component. Additionally, an AC adapter supplies power to recharge the iPod batteries, and a 1/8″ RI jack is employed to carry control signals to the player. A switch on the bottom of the dock can be set to Tape/MD/CDR/or HDD, depending on the port being used on the Onkyo component.

Additional benefits to the DS-A1 interface include the ability to integrate startup and shutdown, timer and sleep functions, and alarm wake ups on compatible components. When playback on the iPod is initiated through the RI system, the Onkyo input selector is automatically adjusted to the iPod. When the iPod alarm function is employed, the Onkyo device can be set to automatically power up and begin playback. Using the S-Video output, a photo slide show can be reproduced from the iPod on connected display devices.

The DS-A1 RI dock is compatible with third and fourth generation iPods, iPod photos, and iPod minis. RI remote controlled components from Onkyo include nearly every audio and home theater receiver, processor, package systems, and all-in-one component systems the company has introduced in the past 10 years.

The Onkyo DS-A1 Remote Interactive dock for iPod features an attractive white finish to match most iPod models, and includes all the connection and cabling necessary for operation. It will begin shipping in May, and will have a suggested retail price of $100.

Onkyo, which means ‘audio’ or ‘sound’ in Japanese, has been producing precision audio components for over a half-century. The company’s philosophy is to deliver products that are superbly designed and built to a consistently outstanding standard of excellence. Today, Onkyo is at the forefront of the home theater and digital revolutions. For more information about this and other fine Onkyo products, visit www.onkyousa.com or call 800-229-1687.