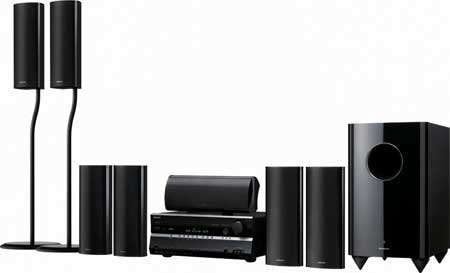 Onkyo has introduced two new 7.1-channel home theater packaged systems that combine the latest in high resolution audio and video processing with the simplicity of an all-in-one system. Both the HT-S7100 and the HT-S6100 include powerful 130 watt-per-channel A/V receivers with HDMI inputs for up to four sources, including internal processing for the latest high resolution audio formats and 1080i video upscaling. The receivers are matched with a high-performance 7.1-channel speaker and active subwoofer package, and the company’s highly regarded iPod dock.

“These systems are a simple, foolproof, and extremely cost-effective solution for high end home theater,” commented Onkyo Marketing Manager Paul Wasek. “They include all the audio and video processing needed to take full advantage of the audio and video capabilities of Blu-Ray disc players and modern HD video displays, without the complexities of an individual component system. With one-cable HDMI connectivity, Audyssey automatic room setup and calibration, and Onkyo’s signature audio performance, these systems are an unbeatable value.”

For connectivity, the HT-S7100 and HT-S6100 A/V receivers each feature four HDMI inputs, including support for 1080p video and DeepColor™ capability. There is internal audio processing for the latest Dolby TrueHD, Dolby Digital Plus, DTS-HD Master Audio, and DTS-HD High Resolution Audio formats, making it possible to extract the full audio potential of the Blu-ray disc format. For video, the receivers include Faroudja DCDi Edge processing that is capable of upscaling all video inputs to 1080i resolution for output via HDMI, improving picture quality and simplifying the connection to HD video displays.

Onkyo’s HT-S7100 and HT-S6100 each feature seven satellite speakers and a powerful subwoofer for deep bass reproduction. The front L/R and horizontal center channel speakers each feature a pair of 3-1/8 inch cone woofers and a high quality 1-inch balanced tweeter. For a coherent and timbre-matched surround field, the included surround speakers each use the same drivers as the front speakers, but employ only a single woofer. Each system includes a high-power downfiring subwoofer with a 10-inch cone driver with an internal 290 watt amplification module. All crossover points in each system can be set to any of eight possible settings for ideal integration with the environment and listener preferences.

Each of the new systems includes the highly acclaimed Audyssey 2EQ room correction and calibration system, greatly improving and speeding up setup and optimization of the loudspeaker system in any environment. They also employ Audyssey’s Dynamic EQ algorithm, which refines the system’s frequency response and surround levels moment-by-moment to compensate for deteriorations in the listening experience at different volume levels. When used in combination with the Audyssey 2EQ system, this feature tailors the receiver’s output to correct for room acoustics, listening position, and playback-level distortions, delivering an overall experience that is a much closer match to what the audio production engineers originally intended.

The Onkyo HT-S7100 and HT-R6100 each include a version of Onkyo’s exclusive iPod dock/charging units. The HT-S7100 features the A/V capable DS-A1XP dock, while the HT-S6100 includes the audio-only DS-A1L.

Both of the systems include a full-function RI (Remote Interactive) remote control and Onkyo’s RIHD (Remote Interactive over HDMI) capability allows them to seamlessly integrate with other leading brand-name devices, including all Toshiba CE-Link equipment and selected Panasonic VIERA Link, Sharp, and Samsung products. Each includes a 30-preset AM/FM tuner. The HT-S7100 is also Sirius Satellite Radio Ready for those desiring to add this service to their entertainment system. (need to add that 1 pair of speaker stands is included in this package)

Finally, the HT-S7100 and HT-S6100 each include Onkyo’s new Music Optimizer software, which improves the quality of MP3 and AAC encoded audio source material. While these compressed audio formats sound quite acceptable over small headphones or PC speaker systems, when reproduced on a full-scale home theater system the loss of high-frequency information becomes much more apparent. The Music Optimizer employs sophisticated equalization and optimization algorithms to overcome these faults, and enhances the reproduction quality of digitally compressed music.

Onkyo, which means ‘audio’ or ‘sound’ in Japanese, has been producing precision audio components for over a half-century. The company’s philosophy is to deliver products that are superbly designed and built to a consistently outstanding standard of excellence. Today, Onkyo is at the forefront of the home theater and digital revolutions. For more information about this and other fine Onkyo products, visit www.onkyousa.com or call 800-229-1687.