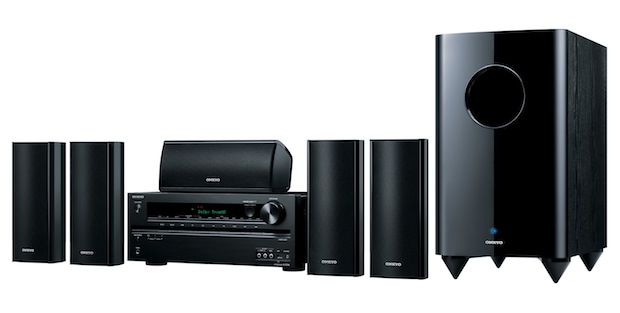 The Onkyo HT-S6500 and HT-S7500 are designed to deliver state-of-the-art high definition video with a Marvel Qdeo video processor that can upscale low-resolution video to 1080p for conventional high-definition displays, and to 4K for the new higher resolution displays. For HDMI sources, there is automatic decoding of Dolby TrueHD and DTS-HD Master Audio high-resolution audio sound tracks to provide fully immersive home theater surround sound. Both systems have built-in networking and USB digital access to a vast array of on-line and digital media resources. The HT-S7500 and HT-S6500 receivers both have HDMI inputs for seven and six source components, respectively, plus ARC (audio return channel ). They also have a direct digital connection for an iPod/iPhone via a front-panel USB Port. This port can also be used with Onkyo's optional UWF-1 Wireless LAN Adapter as well as the forthcoming UBT-1 USB Bluetooth adapter. Both receivers have connections for analog audio, optical/coaxial digital audio, and component and composite video for legacy source devices.

Front view, same for each receiver

Audyssey 2EQ is included to correct room acoustics, Audyssey Dynamic EQ provides for loudness correction, and Audyssey Dynamic Volume to maintain optimal listening levels and dynamic range. Audyssey configuration is incorporated in the new Initial Set-up program. This program employs a graphical user interface that helps the user to set up the system easily and intuitively.