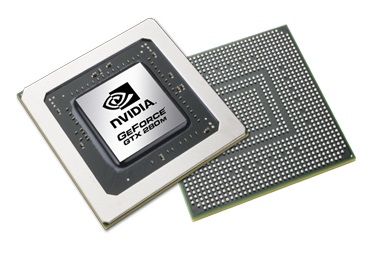 “These new NVIDIA GeForce GPUs are for those who won’t accept compromise in notebook performance,” said Rene Haas, general manager of notebook business at NVIDIA. “These new GPUs meet the needs of the most demanding consumers in the marketplace by delivering industry-leading performance at all price segments along with features that go beyond graphics.”

The new line-up of notebook GPUs from NVIDIA includes:

GeForce GTX 200M and GeForce GTS 100M Series GPUs make playing the latest HD games on a portable platform a reality by delivering blistering frame rates that are up to 50% faster than the previous generation products they are replacing, all without increasing overall power consumption. Using NVIDIA SLI technology, which enables close to double the graphics performance over a single GPU, two NVIDIA GeForce GTX 280M GPUs can be paired to offer the fastest notebook graphics solution available today. In order to enable a quiet state and to increase battery life, NVIDIA HybridPower™ technology can dynamically power down the powerful discreet GPU and transfer graphics operation to the integrated GPU for applications that do not require the high level of graphics horsepower.

GeForce GTX 200M and GeForce GTS 100M Series GPUs feature the NVIDIA CUDA™ computing architecture and deliver Graphics Plus™ capabilities not found on competing solutions. Only with NVIDIA GPUs can you experience jaw-dropping NVIDIA PhysX™ gaming effects and lightning fast video and image processing all accelerated by the GeForce GPU.

Users with notebooks equipped with NVIDIA GPUs have the added flexibility of downloading upgradeable graphics drivers directly from NVIDIA.com so they can immediately take advantage of new features, improved application compatibility, and performance optimizations. NVIDIA is the only GPU manufacturer that offers notebook driver downloads direct to consumers.

ASUS, Clevo and MSI are all showing notebooks based on the new GeForce GTX 200M and GeForce GTS 100M Series GPUs at CeBit.