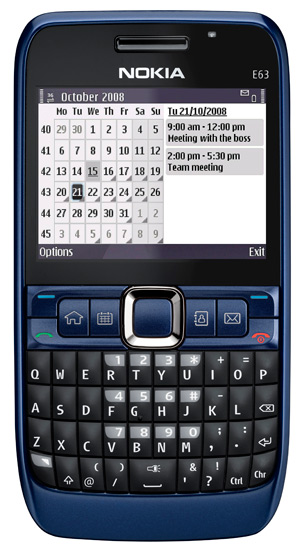 The Nokia E-Series range of mobile phones has now expanded to include the new Nokia E63 smartphone, available in a cool blue exterior casing this new addition to the range joins the original black and more recent red colour variants.

The Nokia E63 Blue has been released as a SIM free mobile phone, this means that consumers can use their existing SIM card containing their mobile number, network account details and any ‘saved to SIM’ contacts, there are no network credit checks involved in the purchasing of the Nokia E63 as the handset is unlocked to all networks and there are no extra ongoing monthly costs for line rental involved.

The beauty of a SIM free mobile phone is that it can be used on any compatible network operator so the user is not tied to just one or two suppliers, the SIM free Nokia E63 would make an ideal replacement for a lost or stolen mobile phone as well as an upgrade to the previous E71 model.

Taking on a similar design form to the Nokia E71 the new E63 adds even more functionality and features into what was already a very practical business phone, the extra colour variants on offer show that the popularity of the full qwerty keypad phone appeals not just to the greyscale professional but to those who enjoy a little personlisation and colour in their life.

Launching around the same time as the new Nokia 5800 Xpress Music the manufacturer is covering both ends of the phones market, from the fashion aware, music lovings consumers right through to the serious business players who need to communicate fast. Both models represent the best in their individual Series and with the addition of the new Nokia N97 as the manufacturers flagship model, Nokia really look like they are going places even in the tough current economic climate.

The Nokia E63 Blue offers exactly the same features, design and technology as the red edition of this top end smartphone, the only difference is that the exterior casing has been exchanged for a new deep blue metallic finish.

The blue Nokia E63 offers a dual home screen option lets users balance their work and personal life in one. Change between two different standby screens; both completely configurable with the users choice of short-cuts, email accounts, message notifications and more. Choose between home/work, home/abroad or customize the the screens however is best for the individual user.

Improve your work flow with the Nokia E63 unlocked, instant push email support delivers messages the moment they are sent. The setup is simple and a dedicated email key and full QWERTY keyboard help get the messages across whilst dual mode functionality allows users to switch between work and personal emails at a moments notice.

The Nokia E63 has a large wide screen display large screen for watching films in their original wide screen format with smooth uninterrupted playback. MP3 music player and microSDHC expandable memory lets users carry their music and movie collection with them when they need to unwind. A 3.5mm headphone socket is also present allowing users to connect their favourite pair of headphones to the E63 whenever they want.

Although initially released as a SIM Free mobile phone the Nokia E63 is expected to be rolled out onto the networks over the coming days giving consumers access to pay monthly contract deals with tariffs to match their usage requirements, the Nokia E63 red is widely predicted to be the next model to be launched form the E-Series range and will probably follow the same release format of SIM free and unlocked first followed by future network launches.

About Phones Limited: A price comparison website for the latest mobile phone deals from over 20 leading UK mobile phones retailers and networks resulting in over 200,000 deals compared daily.