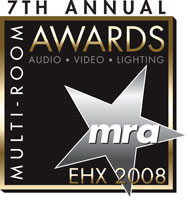 “We are honored to have the ZR-6 MultiZone Receiver recognized as a Multiroom Audio/Video Award winner,” said Frank Sterns, president of Niles. “The ZR-6 provides dealers a multizone receiver solution with all of the features demanded most often, including one-touch operation and iPod integration, along with weather resistant keypads with metadata display. Having the ZR-6 honored with this prestigious award speaks volumes about its balance of performance and functionality.”

The ZR-6 independently distributes up to six audio sources to as many as six zones (expandable to 18) for high quality entertainment throughout a residential or light commercial installation. In addition to a built-in AM/FM tuner that works right out of the box, the ZR-6’s impressive Plug-and-Play capabilities allow users to integrate their iPods with no additional programming. Adding to its ease-of-use, the ZR-6’s dramatically simplifies the installation process thanks to an intuitive, built-in wizard that eliminates the need for computer programming.

For enhanced system functionality, ZR-6 customers may choose from a variety of control solutions, including a color touchscreen and weather-resistant keypads, to ensure the perfect level of control for any location. The ZR-6’s array of control options include the TS-PRO, a 3.5″ color touchscreen display that provides elegant system control plus metadata information, the Solo-6MD, a single-gang keypad with metadata display, the Solo-6IR, an elegant single-gang keypad, and the Numeric-6P, an easy-to-use numeric keypad which works in conjunction with the Solo-6IR. The R-8L Learning Remote Control, included with the ZR-6 and also available as an additional accessory for outfitted zones, provides advanced control for all sources as well as a local TV and associated cable/satellite receiver and comes preloaded with commands for the ZR-6 as well as many popular brands.