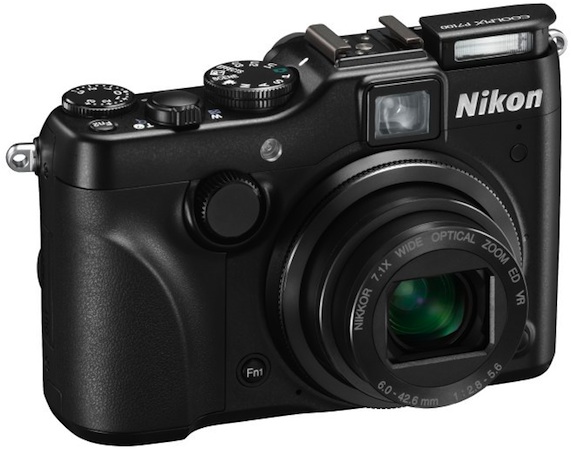 The COOLPIX P7100 captures High Definition (HD) movies and high speed performance to create an appealing package for professionals and enthusiasts alike. With an overall emphasis on image quality, the new enhanced AF system provides tack-sharp images in a variety of lighting conditions. Whether shooting landscapes or action, users have full creative control with the new 3.0-inch tilting vari-angle LCD screen, full manual features and new Special Effects that add a new dimension to images. With the aid of Nikon core technologies and distinctive new features and controls, the COOLPIX P7100 digital camera shifts image quality and performance into overdrive.

Emphasis on the Image
The COOLPIX P7100 includes a number of Nikon core technologies such as the high speed EXPEED C2 image processing engine that is designed to deliver stunning results in diverse situations. New image processing technologies maximize the performance of the large 1/1.7-inch, 10.1-megapixel CCD sensor to deliver sharp, low-noise images that explode with vivid color. By expanding the capabilities of the large CCD sensor, images show reduced noise at both low and high ISO sensitivities. The result is a new level of clean, tonal depth to images, creating an enhanced sense of dimension to any subject and amazingly faithful color reproduction.

Rapid Response When it Counts
With enhanced high speed performance and quick response, the COOLPIX P7100 can capture decisive moments with confidence. The new Nikon P7100 features a new intuitive user interface that reacts seamlessly for high quality results in the blink of an eye. With blazing fast start-up, imperceptible release lag and enhanced shot to shot buffering, the P7100 promises to be ready at a moment's notice. Operational workflow speed has been enhanced, such as switching time for various functions including playback, shooting, menu and button operation as well as navigation. The camera can also capture full resolution JPEG images at up to 1.2 frames-per-second (fps), and gives shooters enhanced response when shooting NRW (RAW) images both as a single frame and consecutively. Additionally, the COOLPIX P7100 is compatible with the latest high speed SDXC memory cards for maximum performance. 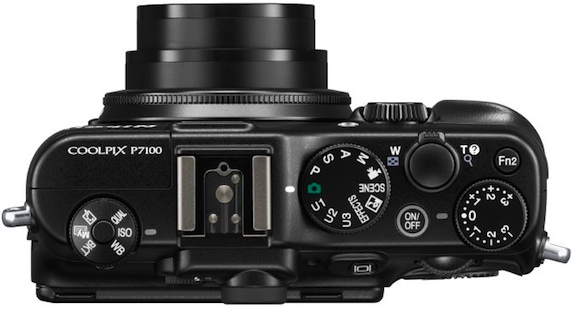 The 7.1x NIKKOR lens has been paired with an enhanced AF system to deliver sharp images and HD movies in a variety of shooting scenarios. Whether tripod mounted to capture a distant vista or shooting a candid portrait, the result is amazingly fast focus acquisition that is consistently sharp throughout the entire focal range, even on a moving subject.

Superior Creative Control for the Advanced User
Detailed engineering led to the authentic styling of the COOLPIX P7100, which calls upon many of the features that Nikon D-SLR cameras are known for, including easily accessible mode dials, rounded curves and friendly ergonomics, all housed within a compact form factor. Consumers can compose through the bright optical viewfinder or by the vivid 3.0-inch 921,000-dot tilting vari-angle LCD screen. The new tilt screen enables more flexible shooting at creative angles, including down low, overhead or for ease-of-use when mounted on a tripod. The clear color vari-angle LCD display with anti-reflective coating produces high resolution and faithful color reproduction with a wide viewing angle. 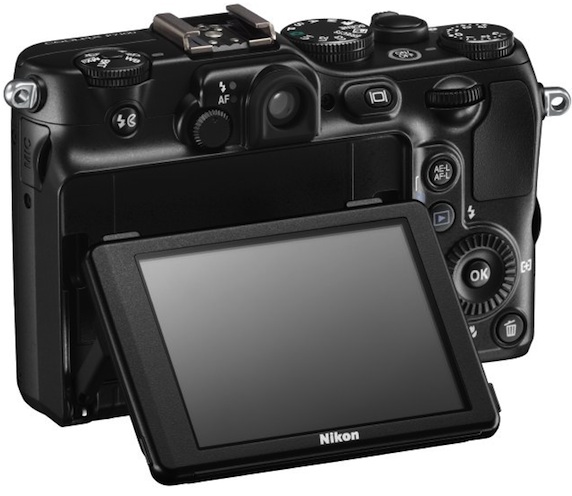 The camera's four exposure modes (Program, Shutter, Aperture and Manual) provide creative control over image capture. For added versatility, the COOLPIX P7100 has a sensitivity range up to ISO 3200, but can also be set to Hi 1 at full resolution (ISO 6400 equivalent). The P7100 also offers functions that enable superior rendering when shooting at high sensitivities, including a Low Noise Night Mode and a Noise Reduction Filter. ISO sensitivity ranges from ISO 100 to 6400 (expandable to ISO 12,800 in Low Noise Night Mode) to ensure sharp, crisp images when shooting in low-light or photographing fast-moving subjects.

For further creative control, the camera offers multiple new Special Effects and Filter Effects to create truly inspiring images. The new Zoom Exposure automates this typically difficult technique to create dynamic images with a slow shutter. Consumers can also choose the Defocus Filter to produce intentional, artful blur or use the Cross Process to create nostalgic and imaginative color tones in images. A new Creative Monochrome Filter can also be implemented to create a solarized look and feel to images or affect grain size in monochrome photos. Shooters can capture a wide tonal range in their images by utilizing the built-in High Dynamic Range (HDR) function as part of the Backlighting Mode, and can shoot in High/Low Key, Sepia and Painting Modes. While in Playback Mode, images can also be altered with a Fisheye Effect or Cross Screen Filter.

The design and interface of the COOLPIX P7100 has been created with the shooter in mind. It boasts two command dials including a new front mounted sub-command dial, which can be used to access settings and adjustments while holding the grip of the camera. The dials provide advance control and a sense of analog operation when using the camera for an enjoyable photographic experience. This control is implemented to simplify various operations using minimal controls. The COOLPIX P7100 also features a quick menu dial on the top of the camera. Through the quick menu dial, controls like ISO sensitivity, White Balance, advanced bracketing functions, My Menu, Picture Control and image size can be swiftly selected to capture desired results. Additionally, the camera's Zoom Memory function enables the selection of a desired focal length during shooting.

For those shooting movies, the COOLPIX P7100 records High Definition (HD) movies at 720p (30 fps) with stereo sound through the built-in microphone. Users can also attach an optional external microphone, such as Nikon's ME-1 microphone, via the stereo microphone jack. The P7100 also incorporates new movie recording features such as lens zooming during recording, a gain-up function to adjust the optional external microphone and an AE/AF lock available during recording, which is similar to that of a D-SLR camera. Additionally, the camera includes a mini HDMI connector that enables playback on HD televisions and other HDMI-enabled devices.

The COOLPIX P7100 can be connected to the optional 0.75x Wide-Angle Convertor WC-E75A, which allows for focal lengths as wide as 21mm (35mm format equivalent). P7100 users can also take advantage of Nikon's Creative Lighting System with the built-in accessory shoe that supports Nikon's i-TTL flash control, including compatibility with the SB-400, SB-700 and SB-900 speed lights.

PhotographyBLOG9 years ago
You Are Here