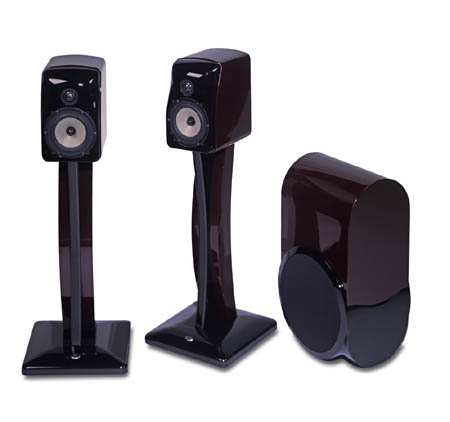 Designed to give installers and end-users an additional choice when adding the acclaimed speaker system to any room, NHT Xd, which the company maintains is the most accurate speaker system in the home audio market, will soon be available in a darker, modern high-gloss finish that, combined with Xd’s initial color choice, will solve nearly all decor requirements.

“Now that shipping is underway, we want to support our dealers by allowing them to cater to end-users’ personal tastes, without the usual ‘one size fits all’ design option,” said Chris Byrne, Managing Director, NHT. “Xd may be the most sonically accurate and, in my opinion, most pleasing system in the business, but, first and foremost, it’s a lifestyle system so it has to blend with any decor.”

NHT Xd is the result of the combined efforts of three companies — NHT, DEQX (Digital Equalization and Crossover), and PowerPhysics –who pooled their respective core technologies to develop a system that removes virtually all possible distortion from the audio signal path while providing a much wider soundfield that remains accurate even when listening far off axis. The system features two small speaker cabinets; a powered bass, or woofer module; and a hybrid outboard component that houses the DEQX-calibrated DSP (digital signal processor) and PowerPhysics One-Cycle Sound amplifiers. Additional channels and bass modules can be added to create surround systems.

Just as the NHT Xd is the offspring of three companies’ design efforts, the system itself is comprised of three essential components, amplifier, speaker and bass module.

Capitalizing on the proven benefits of DEQX CalibrationTM, the NHT XdA DSP/amplifier is the “brain” of the system. Designed to be a truly plug & play solution, the NHT XdA includes only a
few intuitive controls: one for each channel, allowing the end-user to set boundary equalization, i.e., an adjustment for maximizing performance when speakers are placed on or next to a wall, on a stand in the middle of the room, on a TV, or other locations. There are two sets of inputs — RCA and differential balanced (XLR) — plus satellite outputs in the form of custom dual banana jacks (one for each channel). Either one or two bass modules are connected via balanced XLR inputs and outputs on the bass modules and DSP/amplifier, respectively.

The diminutive (10.25″H x 6.5″W x 8.5″D) NHT XdS satellite speaker features a two-way, acoustic suspension design that houses an ultra-low distortion 5.25″ midrange and 1″ neodymium tweeter. A massive “heat sink” is attached to the rear of the tweeter to provide substantial power handling, while the cabinet baffle itself is molded from a dense, sonically neutral composite material designed for far-reaching sound dispersion. Each satellite is bi-amplified, with the midrange and tweeter each powered by an individual amplifier.

Rounding out the NHT Xd system is the NHT XdW powered bass module, comprised of two active, opposed 10-inch drivers and a PowerPhysics 500W amplifier. Unlike other powered woofers, the XdW features only two controls — volume trim and voltage selection. (Crossover functions such as frequency response, phase, crossover point, and time domain filtering are managed by the XdA.)

In the near future, NHT will offer a backwards compatible, wireless option for the bass module, in addition to the wired input. Additionally, the NHT Xd system is designed to be upgradeable via the XdA’s rear-panel USB 2.0 port, allowing end-users to augment their systems as new DSP-based functions are introduced.

The basic NHT Xd system, consisting of two XdS satellite speakers, one XdW bass module, one XdA processor/amplifier, stands, cables, and plugs is available at over 40 audio/video specialty retailers nationwide at a suggested retail price of $6,000.00.

Since it was founded in 1986, NHT has continually challenged the notion that the very best sound reproduction must come at a premium price. Its products from past to present speak volumes of NHT’s dedication to sonic excellence. For more information, visit www.nhthifi.com. NHT (Now Hear This) is a brand name of Rockford Corporation. Rockford Corporation is based in Tempe, Ariz. and is a publicly traded company under the NASDAQ stock symbol ROFO. NHT’s website can be viewed at www.nhthifi.com and www.rockfordcorp.com. For further information, contact Adam Sohmer, SOHMER ASSOCIATES, LLC, 718-499-9161 (voice/fax), 347-512-0066 (cell), adam@sohmerassoc.com.