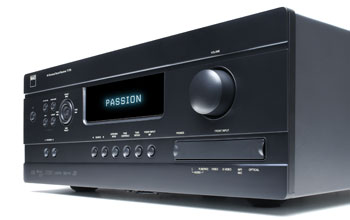 SHARON, MA, Aug. 14, 2007 — International audio-video manufacturer NAD Electronics has for over three decades been acknowledged worldwide as marching to a different drummer–to the invariable benefit of its customers. Now, in one of the most important product introductions in its history, NAD unveils five significant new components–T 785, T 775, T 765, and T 755 AV Receivers, as well as the T 175 Preamp-Tuner-Processor.

While the newest NADs may appear conservative enough, their designs reflect a philosophy altogether distinct from that reflected in today’s typical mass-market receivers. “NAD has never been afraid to skip the heavily hyped, ‘me-too’ features and concentrate on functions and technologies that really make the difference in sound and in picture,” says NAD Director of Product Development Greg Stidsen. “So these new models are classic NAD. Instead of incorporating brochure-friendly video processing, or succumbing to the lure of the wattage wars, we’ve focused on meaningful goals: real-world sonics and power; pristine, non-degraded video, and genuinely ergonomic design and forward-thinking features like our uniquely, proprietarily enhanced Audyssey set-up and room-correction automation.”

The new designs maintain NAD’s core values beginning with its “Music First” design philosophy, which declares that state-of-the-art music recordings remain the truest test of any playback system. NAD’s belief that home-entertainment products have grown far too complex and user-unfriendly also guided the new designs to their simpler, more intuitive, less intimidating user interface. And NAD’s Power Drive amplifier design is found throughout the new range, proving once again that on-paper specs are no measure of how loudly, and how faithfully, a receiver will reproduce.

Advanced HDMI and Digital Video
With HDMI digital video/audio interconnection fast gaining acceptance, implementation becomes a key feature for all next-generation AV gear. Yet here as always NAD has elected to follow the Hippocratic principle of “First, do no harm.” Consequently, while all five new NADs include HDMI v1.3 inputs and switching, they eschew the chip-based video-DSP “upscaling” that looks so attractive in competitors’ brochures, but that so frequently results in video indistinguishable from, or in fact actually inferior to the original source. Instead, the T785, T775, and T175 pre-pro, with four HDMI inputs each, perform superbly high-quality HDMI “cross-conversion,” delivering all analog-video inputs (composite, S-, or component video) to HDMI with full quality. They also deliver NAD’s extensive new on-screen menu/display system via all video outputs including HDMI, permitting a single-cable link to the video display. With three HDMI ins each the T 765 and T 755 provide straightforward HDMI switching (video-only), without display-on-HDMI capability, but like their more costly siblings also perform video transcoding so that signals from any analog-video input (composite, S-, or component) are always present at any of these analog outputs.

All five models route incoming HDMI signals in their original resolution, up to and including 1080p, while the three upper models also accept digital-audio via HDMI, simplifying hookup. NAD urges system-designers and end-users to look beyond the hype and observe that the vast majority of systems can derive no meaningful benefit from 1080p signals (a very large screen/close seating-distance are required even to be perceived), and can easily exceed the capabilities of cables or associated equipment. And since the great majority of popular flat-panel and rear-projection hi-def displays incorporate their own, non-bypassable scalers, any upstream scaler, whether a dedicated component or within an AV receiver, is rendered largely purposeless. NAD’s pure and simple approach avoids the multiple video scaling/processing stages that can actually degrade video performance.

Modular Construction
The NAD T 785, T 775, and T 765 AVRs, and the T 175 pre-pro–share an entirely new electro-mechanical configuration. This places important circuitry on five fully independent, modular circuit cards, including separate cards for digital audio and HDMI, component video, analog video, and 2-channel, and multichannel analog audio. The obvious advantages of this scheme include serviceability and expandability, and easy and cost-effective introduction of new technologies. For example, if and when the Dolby True HD and/or DTS Master lossless multichannel formats become fully useful standards of high-definition discs or other recordings, NAD will make upgraded processing available. With modular construction (and since HDMI v1.3 pipelines are already in place) this can be made practicable and affordable.

“Full Disclosure” Performance and PowerDrive
NAD’s reputation for engineering receivers and amplifiers whose real-world performance far outpaces the expectations of conventional specs is long established, and this new quartet is no exception. NAD’s designs are conceived under its concept of “Full Disclosure Power Ratings.” The new receivers, like every NAD design, guarantee power production under “worst-case” conditions: actual 4_ and 8_ loads, driven full bandwidth from the deepest bass to the highest overtones (20 Hz to 20 kHz), with all channels loaded and stressed simultaneously, and performing at a stated, very low (0.05%) distortion level. By contrast, most of the competition measures a single channel, at a single middle frequency, short-term, and at higher distortion–in some cases up to 10 percent! This certainly makes it easier to advertise a “7×100 watt” receiver–but when measured to NAD’s standards results are nearly always lower, sometimes by as much as 75 percent. NAD achieves this singular advantage not through technological magic, but by solid, conventional engineering including massive, high-current power-supply design and highest-quality output devices providing generous “safe operating area” to ensure clean, dynamic, reliable reproduction at all power levels.

But there is in fact one bit of specialized NAD technology involved. PowerDrive is NAD’s proprietary power-supply arrangement which holds a measure of current storage in reserve, able to be called upon by the dynamic needs of music or filmsound, both of which can routinely make transient demands of 10 to 20 times their average power requirements, several times a second. PowerDrive’s impact is simple: with it, NAD designs repeatedly outperform components rated for twice as much “on-paper” power and even more. By “outperform,” we mean to say they play louder, cleaner, with greater dynamic excitement, and above all with more musicality– and without the dynamic compression, flattened imaging, and even tinges of harshness audiophiles so often associate with “receiver sound.”

While NAD eschews features for their own sake, it actively seeks to incorporate genuinely useful ones. For example, five independent A/V Presets store channel-level, listening-mode, and tone-control settings (among others) for instant recall, making it easy to custom-tailor a system for different types of program material or listener preferences. All five models are XM Ready, requiring only an optional third-party XM Mini-Tuner module to gain access to XM’s extensive digital music and talk content, with full system control and display. Also on board each new NAD is a tuner that includes 40 favorite station presets in any mix of AM or FM stations. FM stations that don’t automatically display their name in addition to their broadcast frequency (RDS function), can instead be given a custom name.

A front-panel Universal Portable Media Player input (3.5mm analog jack) connects iPods and similar portable media devices, while the T 785, 775, T755 and T 175 further include a rear-panel data port for connectivity to an optional NAD iPod-dock, enabling the receiver or pre-pro to control the player and display its “metadata” on-screen using the NAD Illuminated Learning Remote Control. Custom integration/whole-house audio-video facilities span three additional zones (the first incorporating composite-video) for the three top models, and two zones for the T 765 and T 755. A simplified second-zone remote is included with each new NAD model, and all offer a range of flexible 12-volt trigger and IR-connection tools.