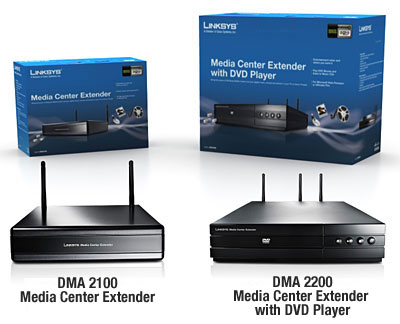 Today at DigitalLife, Microsoft Corp. joined initial launch partners in revealing highly anticipated details about new Extenders for Microsoft Windows Media Center. These devices, which are expected to be available for purchase this holiday season, will allow easy access to premium cable, high-definition TV, popular video formats including DivX, music, paid movies, photos and more from any TV in the house, with a wired or wireless network connection. People can even pause a recorded show in one room, and then resume it from the same moment in another room.

Microsoft also announced that the Extender technology will be incorporated in HP’s current line of MediaSmart high-definition televisions.

“We are excited to reveal the first series of totally quiet, cool, and sleek-looking Media Center Extender devices, designed to deliver the ultimate entertainment experience to every TV set in your home,” said Joe Belfiore, corporate vice president, Entertainment and Devices eHome Division, Microsoft. “These products are the initial third-party devices that can wirelessly connect a TV with a PC, with features including live high-definition TV, PVR, movies, pictures, music and online services. In addition, the Internet TV beta allows Windows Media Center as well as Extender users to enjoy free* high-quality television from some of their favorite studios and networks in Media Center, directly over the Internet.”

New Devices Build a Wireless Entertainment Bridge Throughout the Home
The Media Center Extender with DVD Player (DMA2200) from Linksys, a division of Cisco, is an elegant solution that combines an upscaling DVD player with a dual-band Wireless-N Extender for Windows Media Center. It allows consumers to enhance their entertainment systems by teaming Extender for Media Center functionality with DVD playback capabilities in a single device. For consumers seeking a smaller form factor, Linksys will also offer the Media Center Extender (DMA2100), which delivers all the appealing features of Extender for Windows Media Center in a compact dual-band Wireless-N solution that is ideal for spaces, such as bedrooms, that call for a smaller device footprint. These new Linksys Media Center Extenders give consumers easy access to their HD television content, digital music and digital photos using just one remote control, and feature both digital and optical audio outputs that enable consumers to utilize their existing custom audio systems. They will be available for consumers to purchase in the U.S. this November at estimated street prices of $349.99 and $299.99, respectively. More information is available at http://www.linksys.com/mce.

The D-Link DSM-750 MediaLounge HD Media Center Extender is housed in a sleek, 17-inch, black aluminum chassis, and connects to the home network using Ethernet or dual-band draft Wireless-N networking to make it easy to enjoy the Windows Media Center experience with friends and family on a home entertainment center. The DSM-750 lets customers enjoy HD videos with resolutions of up to 1080i; supports Windows Media Video (WMV), DivX, and XVid formats; and includes a USB 2.0 port for instant access to music, photos and videos stored on removable USB flash drives or hard drives. The suggested retail price for the device is $349.99 (U.S.).

The HP MediaSmart LCD HDTV, currently available in 42-inch and 47-inch sizes, will support Extender for Windows Media Center technology through an optional software download, expected to be available in early 2008. The MediaSmart TVs support 1080p video, 802.11n wireless, and DivX, XVid, WMV and other video formats — delivering all the compelling features of the Media Center Extender platform incorporated directly into a TV. Although existing MediaSmart users can already access photos, music, videos and movies by simply connecting their TV to their wired or wireless home network, Media Extender functionality will provide them with a new set of enhanced features — such as controlling live TV and accessing Windows Media Center Internet TV — all easily accessible using their TV remote control. The HP MediaSmart TV is available in Best Buy stores nationwide, and through a wide range of audio/visual specialty stores throughout the country.

Windows Media Center Internet TV Beta Is Launched
On the morning of Sept. 28, 2007, U.S. users of Windows Vista Home Premium edition and Windows Vista Ultimate edition will find a new feature inside Media Center: the beta release of Internet TV. This new feature will allow people to enjoy a range of television and video content on their PCs and TV sets without a TV tuner in their PC. This streaming video content will be supported by an advertising platform provided by YuMe and will be available to viewers for free.*

The content available in Internet TV comes from MSN Video, with more than 100 hours available at the start of the beta period, including the following:

Sports clips from FOX Sports
Internet TV has been designed for both the TV and PC screen, and features high-quality video optimized for broadband streaming. Viewers can enjoy these high-quality videos on Extenders for Windows Media Center, including Xbox 360 consoles, as well as PCs running Windows Media Center in Windows Vista (available in Windows Vista Home Premium and Ultimate).

Extend Your Digital Entertainment to the Whole Home
Watching a recorded TV show in the living room, pausing it, and then quickly resuming it from the bedroom or kitchen will soon become even easier with these new low-heat, quiet, home-theater-designed devices. Extenders for Windows Media Center support streaming live high-definition TV, including premium cable channels in the United States, along with formats such as high-definition WMV. The D-Link, HP and Linksys devices add built-in support for dual-band Wireless-N networking; and the D-Link and HP devices have expanded support for popular video formats such as DivX, XVid and H.264. These devices allow people to almost instantly start enjoying their entertainment — there’s no need for a built-in hard drive to cache the video before viewing.

New Extender devices are expected to be available this holiday season and will unleash photos, music, videos, and both live and recorded TV from PCs running Windows Media Center in Windows Vista for viewing and listening on big-screen TV displays or standard definition TVs, delivering the ultimate entertainment solution with a wide range of flexibility — ready for today and the future.

These Extenders will lead the industry in supporting the ability to send protected HD content to additional rooms, including recorded TV from over-the-air Advanced Television Systems Committee or Digital Cable tuners. Extenders also support on-demand broadband content from Media Center Online Media partners such as up-to-date sports reports from FOXSports.com, kids programming from Nickelodeon, downloadable TV episodes from Showtime Networks, and subscription movies on demand from Starz VONGO, along with support for a wealth of third-party plug-in applications.

More information about new Extenders for Windows Media Center is available at http://www.windowsvista.com/extender.

Founded in 1975, Microsoft (Nasdaq “MSFT”) is the worldwide leader in software, services and solutions that help people and businesses realize their full potential.

* Internet service charges may apply. A broadband connection is necessary to view Internet TV. The feature will not work with a dial-up connection or offline.