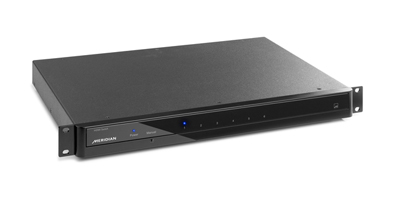 Meridian introduced the HD621 HDMI Audio Processor and 6-into-1 video switch allows all HDMI-equipped components to be fed via a single cable to the display. Going a step further, the processor also separates up to 8 channels of audio signal from the data stream at the HDMI source and provides audio-only outputs for connection to an existing Meridian Surround Controller.

HDMI (High Definition Multimedia Interface) connectors are a common sight on HD video and other equipment. Designed primarily to carry digital video, HDMI also carries digital audio. Unfortunately, having both audio and video on the same cable is not always convenient, nor does it deliver the maximum level of quality of which digital multimedia signals are capable.

Digital video signals have traditionally been the bane of those in search of the best audio quality. Common problems associated with the signal degradation include noise and even disrupting the signals themselves, causing muting, interpolation and other effects. In particular, digital video can leak into analogue audio circuitry, causing hum, buzz, noise and other unwanted artifacts.

Meridian’s new solution easily handles these problems allowing all components that deliver video via HDMI to a common destination. Thus, a single cable can be run from the HD621 to the display, while enhanced digital audio is fed to the sound system. The HD621’s audio outputs connect directly to an existing Meridian processor, offering complete and immediate system integration.

The HD621 includes Meridian’s comprehensive FIFO buffering and resolution-enhancement system, similar to that used in the acclaimed 800 Series. This process cleans up and audibly improves the quality of incoming PCM digital audio signals, ensuring that the audio extracted from the HDMI stream is of the purest quality. Meridian has also included a configurable lip-sync delay to compensate for the potential system latency caused by video processing which is commonly more time-consuming than audio processing.

With ease of installation and integration in mind, the HD621 features a RS-232 serial port that enables it to be fully configured and integrated into a media system or touchscreen-controlled home theater, via serial command. There is also Meridian Comms (over DIN and BNC) for connection to a larger Meridian system. For the finishing touch, the HD621 is housed in an elegant black slimline 1U rack-mount panel for unobtrusive installation.

The 3D capable firmware is already being installed in all new production HD621 HDMI Audio Processors, and is now available to all Meridian retailers and installers who can update products already installed in customers’ homes and systems, bringing 3D support to their Meridian Digital Theaters and surround systems.