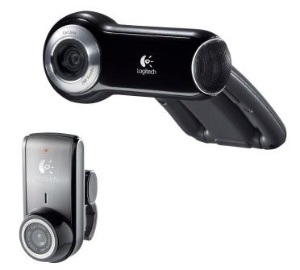 Logitech has been driving webcam technology since its inception and recently shipped its 50 millionth webcam. The company’s cooperation with Carl Zeiss represents a significant step in the evolution of video communications. Logitech’s exclusive collaboration with Carl Zeiss — the recognized leader in optics for many applications, including cameras, eyeglass lenses and space telescopes — ensures that the QuickCam Pro 9000 and the QuickCam Pro for Notebooks are the first webcams to meet Zeiss’s world-renowned standards for lens design and manufacturing. The new QuickCam Pro-series webcams incorporate a Carl Zeiss Tessar lens, a lens design renowned for delivering superior sharpness while being very light weight and compact.

“We are excited to join forces with Logitech and to expand our reach into this interesting market,” said Dr. Winfried Scherle, vice president and general manager of Carl Zeiss’s Camera Lens Division. “The new webcams announced today are just a preview of the advancements in image quality that we anticipate from this collaboration.”

“People will be amazed by the outstanding image quality of these webcameras,” said Gina Clark, general manager and vice president of the Logitech’s Internet Communications business unit. “Logitech’s goal with our webcams has always been to better connect people from around the world. With Carl Zeiss, the company that essentially invented the science of camera optics, we are closer to making video communications nearly indistinguishable from having a conversation in the same room.”

Whether it’s a son or daughter showing an engagement ring to their parents, grandchildren giving their grandparents a close-up view of their latest drawing, a buyer showing their business partner the exact color of a new product, or a mother capturing the changing facial features of their sons and daughters for a scrapbook — the QuickCam Pro 9000 and the QuickCam Pro for Notebooks create pixel-perfect images that help people make better connections with their friends and families, coworkers and clients.

For high-definition video capture, the QuickCam Pro 9000 and QuickCam Pro for Notebooks records video at up to 30 frames per second. And because both webcams support the 720p high-definition (HD) video format, recording to disc at a resolution of 960 by 720 pixels, people can capture and view incredibly sharp video clips.

With more than 15 million downloads in the last two years, Logitech Video Effects™ — which include avatars, face accessories and the new Fun Filters — make video calling more entertaining. The Video Effects software allows people to completely transform themselves into three-dimensional animated characters (avatars), or add accessories such as glasses or funny hats to their on-screen image. Logitech Video Effects are free for webcams supporting the feature and available for download at http://www.logitech.com/videoeffects.

For the office and the home, the Logitech QuickCam Pro 9000 comes with a flexible universal base, which allows it to rest comfortably on nearly any monitor. For the on-the-go professional, the Logitech QuickCam Pro for Notebooks is sold with a protective travel case and an adjustable, spring-tension clip that accommodates even large laptops with panels up to 20 mm thick. The versatile QuickCam Pro for Notebooks also includes a stylish stand that can sit on a desktop and raise the webcam to eye level.

Logitech, the Logitech logo, and other Logitech marks are registered in the United States and other countries. Carl Zeiss and Tessar are trademarks or registered trademarks of Carl Zeiss AG. Used with permission. All other trademarks are the property of their respective owners. For more information about Logitech and its products, visit the Company’s Web site at http://www.logitech.com.