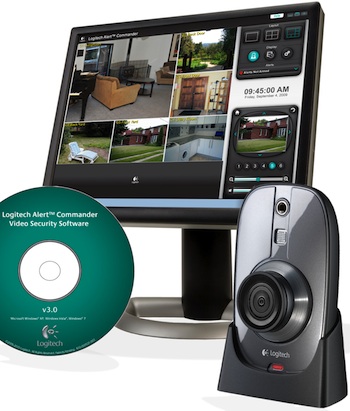 Logitech today introduced Logitech® Alert, a complete HD digital video security system that lets you keep an eye on what matters most. Whether it's looking in on the house while traveling, checking in on the baby while you're at work, or monitoring your second home, the Logitech Alert 750i Master System and the weatherproof Logitech Alert 750e Outdoor Master System with night-vision let you be there when you're not, by providing everything you need to monitor your home inside and out. The new Logitech Alert master systems come with a smart HD camera, powerful PC and Web software, and free remote viewing on a PC or Mac® computer, or smartphone.

Motion-Triggered Alerts and Recording — Capture Only What's Important
Logitech Alert smart cameras also feature a built-in DVR (Digital Video Recorder), and automatically record video when motion is detected, letting you capture only important events. The Logitech Alert Commander software lets you define up to 16 motion zones, allowing you to easily pay attention to critical areas of your home while ignoring others — reducing false recordings. Logitech Alert cameras come equipped with a 2GB MicroSD card for storage, eliminating the need for your PC to be always on. The card can give you enough space for up to a week of video based on the amount of motion-triggered recording in a typical home. The recorded video is automatically backed up when your PC is connected to your network.

Capture Video More Clearly — Even at Night, in Any Condition
Every camera in Logitech's new video security lineup captures high-definition 720p video and features a 130-degree wide-angle lens, making it easier for you to recognize the faces of potential intruders or the license plates of suspicious vehicles. The Logitech Alert 750e and 700e feature IP55 (International Protection Rating) certified, weatherproof outdoor cameras with powerful HD night-vision, allowing you to monitor in complete darkness regardless of weather conditions.

Watch From Anywhere
Logitech Alert Commander software allows you to easily configure your video security system, watch live video, archive recorded video on your PC and review the recordings captured by your camera. The Logitech Alert master system includes free remote viewing of live video through a browser on a secure site from any Internet-connected computer or through Logitech's free smartphone applications for iPhone®, Blackberry® and Android®. For power users who would like more control on the go, the premium Logitech Alert Web and Mobile Commander service provides you all the access of your Logitech Alert PC software, even when you're away from home.

Easily Expandable
There's no need to limit your security coverage to a single camera. Logitech Alert is designed to be easily expandable. You can set up as many locations as you want and mix and match up to six Logitech Alert cameras per location — indoors and out.

Logitech Alert Web and Mobile Commander will be available as a bundle with a seven-day free trial and a suggested retail price of U.S. $79.99 per year.

“The video security market is characterized by expensive, hard-to-install and hard-to-use security systems, as well as poor-quality monitoring cameras. As part of our vision to bring HD video to anyone, anywhere, Logitech is thrilled to introduce a completely new video security solution to consumers and small businesses, which offers HD video quality and motion-triggered live viewing and recording at attractive price points.”
— Eric Kintz, vice president and general manager of Logitech's video business

WIRED10 years ago
Advertisement. Scroll to continue reading.
You Are Here