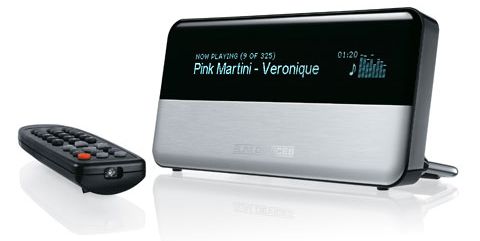 FREMONT, Calif. Oct. 18, 2006 and ROMANEL-SUR-MORGES, Switzerland, Oct. 19, 2006 — Logitech International (SWX: LOGN) (Nasdaq: LOGI) today announced that it has acquired Slim Devices, Inc., a pioneer in the development of music systems that take advantage of a home network. Products from Slim Devices, such as the acclaimed Squeezebox™ and the recently announced Transporter™, enable people to enjoy high-quality digital music, in multiple rooms of the home, regardless of whether the music is streaming directly from the Internet, or from a PC, Mac, or storage device on the network. Logitech purchased the privately held Slim Devices of Mountain View, Calif. for $20 million in cash plus a possible performance-based payment, tied to reaching certain future revenue targets.

“With the acquisition of Slim Devices, Logitech is building on our foundation of innovation in digital music and home-entertainment control to address an emerging market,” said Guerrino De Luca, Logitech president and chief executive officer. “Our focus is on people who want to listen to and control their digital music, anywhere in the home. Slim Devices brings expertise in both network-based music delivery and high-quality audio, and a committed community of developers. Slim Devices complements Logitech’s existing technology and human-interface strengths, helping to ensure that we can deliver to music lovers the promise of the digital home.”

“With digital music, the convergence between PC technology and home entertainment is particularly evident,” said Junien Labrousse, senior vice president of Logitech’s Entertainment and Communications business unit. “Millions of people around the world, in all walks of life, are using their PC or Mac to store their music collection and those with broadband Internet connections are enjoying the wealth of Internet-radio content and other services. At the same time, increasing numbers of these music enthusiasts have wireless home networks that can be used to distribute the music throughout the home. Logitech sees significant potential for network-based digital music systems that can enhance the listening experience with high-quality audio, flexibility, choice and control.”

In a recent survey of online households in the U.S., conducted by research firm Parks Associates, nearly half of respondents characterized as music aficionados indicated very high interest in the ability to listen to any song, whenever they want, wherever they are, and one third of these respondents were very interested in listening to Internet or computer-based music/audio on their stereo. According to Parks Associates Chief Executive Officer Tricia Parks, “We forecast music downloads, online radio and music-subscription services at close to $1 billion in 2006 for the U.S. alone. We forecast that amount to increase in the U.S. to over $3 billion annually by 2010. Those figures dont even count the hardware revenues from necessary adapters and controllers. Clearly, Logitech’s timing for the acquisition of Slim Devices is excellent, just as it was for the acquisition of the Harmony remote business. This fills out Logitech’s wireless music line, and offers audiophiles interested in high-fidelity sound their own network solution.”

Slim Devices was founded in 2001 by Sean Adams, serving as chief executive officer, who was joined by Dean Blackketter, serving as chief technology officer. The company has worked with the contribution of a worldwide open source community to develop the SlimServer software, which powers the Squeezebox and Transporter, as well as the SqueezeNetwork, which delivers content to the devices from the Internet, without requiring a PC. By becoming part of Logitech, the Slim Devices team gains the advantage of Logitech’s expertise in interface-product design and amplified-audio systems, as well as marketing resources and distribution channels, which include consumer electronics retailers in countries throughout the world.

Led by Sean Adams, the Slim Devices team will become a distinct group within Logitech’s Entertainment and Communications business unit. “Slim Devices has been very successful in developing and enhancing network-based solutions for delivering premium-quality digital music and Internet radio to music lovers, thanks to our effective collaboration with our open source community,” said Sean Adams. “Now we have the opportunity to leverage the marketing, sales, distribution, supply chain, manufacturing and engineering resources of a company that shares our passion for innovation in digital music and that can help us reach a wide range of mainstream customers. We’re very excited about joining the Logitech team to continue to shape the future of digital music in the home.”

Labrousse continued, “We’re very enthusiastic about broadening our development efforts with the inclusion of the Slim Devices team and one of their key assets a committed community of developers.”

Audio is one of Logitech’s fastest-growing businesses, growing by 112 percent in the company’s last full fiscal year, ended March 31, 2006. The growth has been driven by the increasing popularity of digital music, which Logitech supports with award-winning, premium PC speakers, as well as a line of stylish and high-quality iPod/MP3 speakers and headphones. Logitech is the worldwide market leader in PC speakers, and is gaining significant momentum in the iPod/MP3 speaker market.

As part of its commitment to the emerging market of wireless music systems, Logitech recently launched the Wireless DJ Music System, which allows people to stream digital music from a PC to a stereo without a home network. The product includes the Wireless DJ remote, which makes it easy to browse and play music selections from anywhere in the home.

Logitech’s presence in the living room includes delivery of digital music as well as control of music and home-entertainment systems. Since acquiring its Harmony remote business in 2004, Logitech has become the clear market leader in advanced programmable remote controls in the U.S., and the emerging leader in Europe. Distinguished by their ease of setup and use, the Harmony remotes have become widely available in consumer retail outlets throughout North America and Europe.