JVC implemented a new D-ILA device and a new wire grid polarizer. JVC has also added a user-selectable Intelligent Lens Aperture that can dial in even deeper blacks. And projectors equipped with 4K e-shift3, the latest iteration of the company’s e-shift technology, feature a 4K signal input (60P) so that now both 4K and 2K sources can be displayed as 3840 x 2160 images. 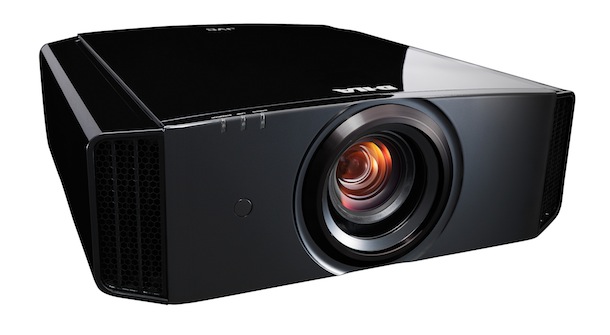 The new JVC projectors use three sixth generation JVC D-ILA imaging devices. This new device features a pixel gap that’s 40 percent narrower than the previous chip for a smoother picture, a 10 percent improvement in light efficiency for a light output of 1,300 lumens, and improved native contrast, which is also enhanced by a new, third generation wire grid optical engine. As a result, native contrast ratios for the new projectors are:

JVC’s 4K e-shift technology was first developed to upconvert and scale 2D HD content to a 4K signal. With 4K inputs, the new JVC projectors can now process 4K signals as well to deliver a smooth, detailed image. Picture performance is further optimized by a new Multiple Pixel Control (MPC) processor with eight-band detection. The MPC processor offers four presets plus an Auto setting that automatically selects the best upconversion process by detecting the frequency of each pixel.

Other new enhancements for 2014 are:

Key features carried over from the 2013 line include:

The flagship DLA-X900R and DLA-RS67/6710 are built using hand-selected, hand-tested components and have a 150,000:1 native contrast ratio and 1,500,000:1 dynamic contrast ratio. For 3D viewing, they come with two pairs of PK-AG3 RF 3D glasses and a PK-EM2 3D Signal Emitter. The DLA-RS6710 also includes a spare lamp and comes with a five-year warranty versus a three-year warranty on the DLA-X900R and DLA-RS67.

The DLA-X900R, DLA-X700R, DLA-RS6710, DLA-RS67 and DLA-RS57 offer ISF certification and are designed to pass the 400-plus tests necessary to achieve THX 3D Certification (pending) – a promise to consumers of the highest level of quality and performance. All JVC THX Certified Projectors include THX 2D and 3D Cinema viewing modes to provide the most accurate color reproduction available in a pre-calibrated setting, ensuring content is rendered back just as its creator intended.

Price and Availability
The new JVC D-ILA home theater projectors will be available November 2013 at the following prices: