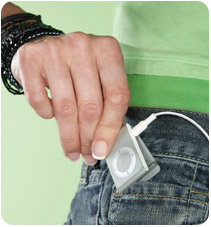 Apple’s New, Most Wearable iPod Ever

Apple’s new iPod shuffle, the world’s smallest digital music player, will be available in Apple’s retail stores and Apple Authorized Resellers this Friday, November 3. Nearly half the size of the original, the new iPod shuffle is just half a cubic inch in volume, weighs just half an ounce and features a minimal aluminum design with a built-in clip, making it the most wearable iPod ever. The new iPod shuffle contains one gigabyte of flash memory which holds up to 240 songs, and is priced at just $79.

“With its ultra-compact design and built-in clip, the new iPod shuffle is the most wearable iPod ever,” said Greg Joswiak, Apple’s vice president of Worldwide iPod Product Marketing. ” The new iPod shuffle completes our all-new lineup of iPods for this holiday season and beyond, and we hope it’s going to be a huge hit.”

The new iPod shuffle features up to 12 hours of battery life* and is based on Apple’s pioneering shuffle feature which lets music fans serve up a continuous mix of their favorite songs anywhere they go. Users can enjoy their songs in a random order or simply flip a switch to listen to their songs in order, such as when listening to a new album.

Users connect the new iPod shuffle to their Mac or PC with the included dock, and iTunes’ innovative AutoFill feature automatically syncs the perfect number of songs from their music library. Seamless integration with iTunes 7 and the iTunes Store (www.itunes.com) allows customers to choose from a selection of over 3.5 million songs from the world’s most popular digital music store.

With Apple’s legendary ease of use, pioneering features such as integrated podcasting support, iMix playlist sharing, seamless integration with iPod and groundbreaking personal use rights, the iTunes Store is the best way for Mac and PC users to legally discover, purchase and download music and video online.

Pricing & Availability
The new iPod shuffle will be available beginning this Friday through Apple’s retail stores and Apple Authorized Resellers for $79 (US). Customers can order the iPod shuffle through the Apple Store (www.apple.com). iPod shuffle includes earbud headphones and an iPod shuffle dock.

iPod shuffle requires a Mac with a USB 2.0 port and Mac OS X version 10.3.9 or later and iTunes 7.0.2 or later; or a Windows PC with a USB 2.0 port and Windows 2000 (Service Pack 4), Windows XP Home or Professional (Service Pack 2) and iTunes 7.0.2 or later. Internet access is required and a broadband connection is recommended.

* Battery life and number of charge cycles vary by use and settings. See apple.com/batteries for more information. Music capacity is based on four minutes per song and 128-Kbps AAC encoding; actual capacity varies by content.