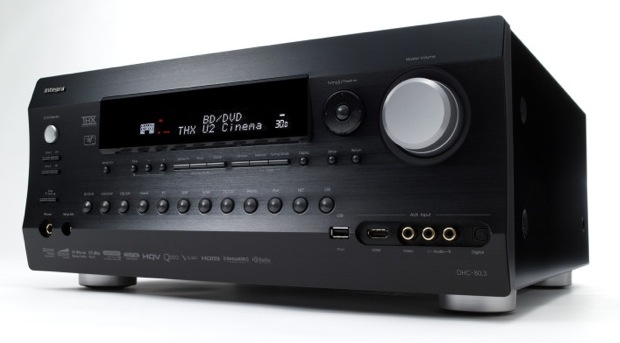 The 9.2-channel DHC-80.3 uses the new DTS Neo:X dimensional sound processor, which is the industry’s first 2.0/5.1/6.1/7.1-to- 9.1/11.1 conversion technology within a single algorithm, in addition to Audyssey DSX, and Dolby ProLogic IIz.. With eleven speaker- or line-outputs, it can accommodate a variety of different combinations of front, height, wide, and surround channels without the need to rewire speakers. The DHC-80.3 uses high-end balanced XLR outputs designed for optimal performance with a comparable high-end nine-channel power amplifier, like the Integra DTA-70.1.

The DHC-80.3 features extensive networking capabilities with an Ethernet connection plus front and rear USB ports for digital storage devices and other devices. Direct digital connection for iPod/iPhone is available through the front panel USB. This receiver is certified for Windows 7 and DLNA, and can playback a great variety digital audio file formats via a home network or USB devices. An iPod or iPhone can also be connected using and optional dock connected via Integra’s proprietary Universal Port, which can also be used for an optional HD Radio Tuner and forthcoming wireless devices. The network connection provides Internet radio and streaming music services, with preformatted service packages for Spotify, Mediafly, Pandora, Slacker, Napster, Rhapsody, vTuner, SIRIUS XM Internet Radio, and Last.fm.

Integra has also announced the immediate free availability of wireless remote control Apps that will allow all 2011 Integra processors and receivers to be controlled using an iPod/iPhone or Android wireless device.

Price and Availability
The Integra DHC-80.3 AV preamp processor is now shipping to Integra dealers, and will be available soon for $2,300 MSRP.