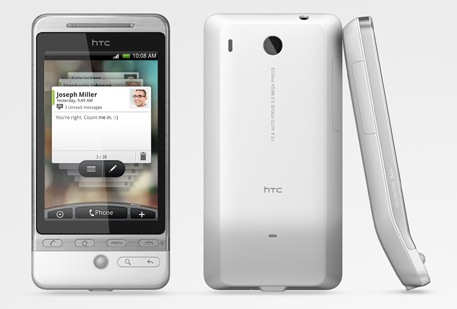 Sprint and HTC Corporation today announced the upcoming arrival of the much-anticipated HTC Hero™ from Sprint, the first wireless device offering the combination of the open and innovative Android platform with the high-speed connectivity of a 3G network (EVDO Rev. A.) Offering a rich mobile Internet experience, the much-anticipated HTC Hero offers synchronization for built-in Google mobile services, including Google Search™, Google Maps™, Gmail™, and YouTube™ as well as access to thousands of applications built on the Android platform.

Beginning on Oct. 11, customers will be able to purchase HTC Hero from Sprint for $179.99 (excluding taxes) after a $50 instant savings and a $100 mail-in rebate with a two-year service agreement.

Intuitive, user-focused and fun
HTC Hero is the first U.S. device to feature HTC Sense, an intuitive experience that was built with a guiding philosophy to put people at the center and allows the device to be completely customized to the wants and needs of the user. The device’s seven-panel wide home screen can be populated with customizable widgets that bring information to the surface.

HTC Hero users can easily create and switch between Scenes to reflect different moments or roles in their lives, such as work, social, travel and play. For example, a work Scene can be easily set up to include stock updates, work email and calendar, a play Scene could have music, weather, and a Twitter feed or a travel Scene could offer instant access to the local time, weather and maps.

“HTC Sense on HTC Hero revolves around three basic principles: Make it Mine, Stay Close and Discover the Unexpected. These principles are based on the recognition that people want their mobile device to conform to their needs and wants, easily keep them in touch with the most important people in their lives, and surprise them with small moments of joy and delight,” said Jason Mackenzie, vice president of HTC America. “Working with Sprint to introduce HTC Hero to the US was a natural fit, as both HTC Hero and Sprint’s Simply Everything plan are designed to give customers everything they need in a simple package.”

HTC Hero’s development focused on how real people use their phone, resulting in small but important touches to accentuate the mobile experience. HTC Hero can be silenced by simply turning it over. It offers an advanced smart dialer for quickly accessing contacts with just a few letters or numbers and a dedicated search key that automatically searches for only information relevant to the current function. When pressed in the mail application, the search will be for text within the mailbox, while a press of the same key from the browser will initiate a Google search.

It is the first Sprint device to offer HTC Footprints™, an application experience that enables the user to chronicle their special moments by capturing a digital postcard on their phone. Once captured, Footprints provides the ability to take notes and an audio clip of that favorite restaurant or special place while identifying its specific location. In addition to identifying each postcard with its specific GPS coordinates, Footprints also auto-names each postcard with its general location or area.

HTC Hero is a full-featured smartphone with Wi-Fi capability, a 3.2-inch capacitive touchscreen with pinch-to-zoom capability and a fingerprint resistant coating, integrated GPS navigation, and trackball navigation. Additional features include: