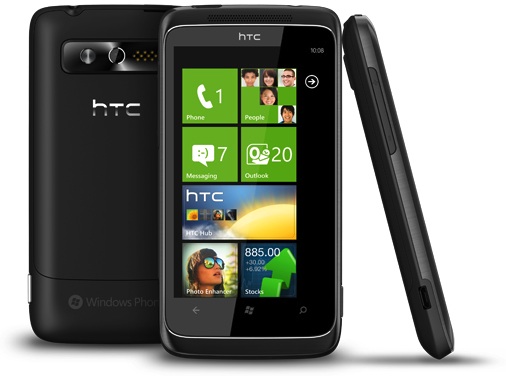 HTC and Vodafone announced the HTC 7 Trophy, a new Windows Phone 7 smartphone, exclusively to Vodafone customers in selected markets across the world from October 2010. The HTC 7 Trophy has been designed as the ultimate mobile entertainment device, taking full advantage of the Zune and Xbox LIVE integration of Windows Phone 7.

Featuring an easy-to-navigate, customisable, live 'Tile and Hub' user interface that updates dynamically, Vodafone customers will be able to get the information that is most important to them, including, for example, their latest messages, social network updates and weather and stock information. Alongside easy access to Vodafone's personalisable 'My Web' portal, customers can also download exclusive HTC applications from the Marketplace via the HTC Hub.

The ideal handset for keeping in touch with friends and making the most of every free second, the HTC 7 Trophy features enhanced support for gaming and entertainment. For those who want to capture the moment, the five megapixel camera with autofocus and LED flash makes it easy to take high quality images and high-definition, 720p video, while the photo enhancer application, available from the HTC Hub, allows people to be more creative with their photos.

HTC 7 Trophy customers can take their favorite content with them, wherever they may be, thanks to the Zune media system, which allows music, movies or even Xbox LIVE content to be downloaded straight to the handset's 8GB of in-built memory, or synchronized from a PC. Featuring Dolby Mobile and SRS WOW HD virtual surround sound, music and video content played through the integrated multimedia player can be enjoyed at a far more immersive level than was previously possible.

The HTC 7 Trophy unlocks a whole new world of Xbox LIVE gaming, bringing companion titles from favourite Xbox franchises and some of the world's leading games developers to Vodafone customers. Thanks to the 1GHz Snapdragon processor, fast action gameplay is responsive and exciting. Gamers can test the games for free before choosing to purchase, create their own avatar and play phone-to-phone or phone-to-PC for an added multi-player experience. With the ability to upload scores to online leaderboards or share them with friends, the HTC 7 Trophy makes the concept of mobile community gaming a reality for Vodafone customers.

Availability
HTC 7 Trophy will be available this month exclusively through Vodafone in Germany, France, Spain, United Kingdom, Austria, Switzerland, Australia and New Zealand, and from M1 in Singapore. U.S. availability has not been announced.

iPhone 7 Plus vs HTC U11 Comparison

The Red Ferret7 years ago

techAU9 years ago
You Are Here