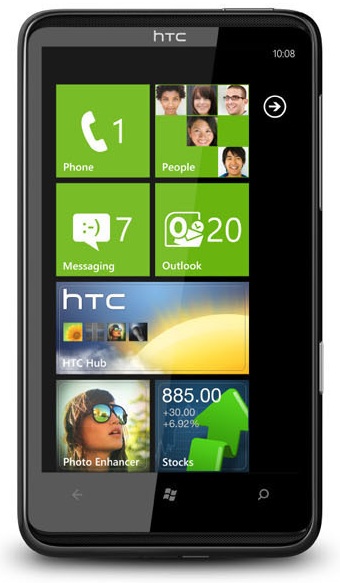 T-Mobile announced the upcoming launch of the HTC HD7, one of the world's first smartphones using the Windows Phone 7 operating system. Pairing rich mobile multimedia features with a 4.3-inch touch display — the largest screen available on a Windows Phone in the U.S. — the HTC HD7 promises to keep customers entertained and connected on the go.

The HTC HD7 is the first phone from T-Mobile built on Windows Phone 7, Microsoft's new mobile platform designed to bring together what customers care about most. Instead of the common icon displays on the screen, Windows Phone 7 uses Live Tiles, which allow customers to find out what's going on, what's happening next, and what they've missed without having to open an application.

Windows Phone 7 also delivers an integrated experience on the HTC HD7 through Windows Phone Hubs. Hubs bring together a related set of applications, services and content into a single view to simplify common tasks. Your contacts, music, games and work can be shared, synced and accessed virtually wherever you happen to be.

With the new HTC HD7, customers can access their favorite movies, TV shows, games, music and more on a large 4.3-inch screen. The HTC HD7's top pre-installed entertainment applications include the following:

Running on T-Mobile's super-fast mobile broadband network, the HTC HD7's 4.3 inch capacitive screen with built-in kickstand is ideal for watching the latest movies and other video entertainment or experiencing a large selection of games and applications. The device also comes equipped with a blazing-fast Qualcomm® 1 GHz Snapdragon processor for a fast mobile data experience.

The HTC HD7 is also the first device to offer T-Mobile® Family Room, a new application exclusively from T-Mobile that helps families keep in touch and manage their busy lives. Customers can write a note on a virtual chalkboard and add shared calendar events for their Family Room group to coordinate get-togethers. Sharing pictures and interacting is easy, with real-time notifications alerting users when any family member posts something for everyone to see.

Availability
HTC HD7 will be exclusively available in the United States with T-Mobile USA by mid-November from $149 (with 2-year contract). Also, available at Amazon.com from $0.01 with new contract.

BGR10 years ago
You Are Here