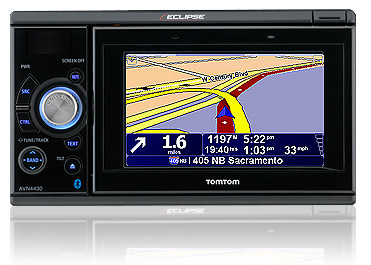 ECLIPSE Introduces the “AVN+Portability” Concept with the AVN4430, a CES 2009 Innovations Honoree

FUJITSU TEN LIMITED, manufacturer of leading automotive electronics, unveiled the ECLIPSE AVN4430 in-vehicle navigation system. This new product is the latest realization of the company’s AVN concept, which revolves around the three core points of a perfect fit, comfort + awareness and integrated technology, in order to promote driving safety and comfort. Since 2004, ECLIPSE has put the AVN concept and products on the market and has continuously received high evaluations. The AVN4430 also fills a unique position in the AVN product category as its navigation section is detachable for use elsewhere. The AVN concept was validated by the unit’s selection by the Consumer Electronics Association as an “Innovations 2009 Design and Engineering” honoree.

Meeting consumer demands for sophisticated audio and visual mobile entertainment in combination with portable navigation, the AVN4430 is a full-function, permanently mounted source head unit that does not compromise driver sight-lines or airbag operation, as it is mounted in-dash for a perfect fit.

Entertainment is full-featured with CD and DVD as well as iPod audio and video, with audio and video performance comparable to that of dedicated component units. The unit plays DVDs, CDs, CD-R/RWs, MP3 and WMA files. A motorized tilting front panel hides the slot for the discs while direct access to iPod audio and video is via cable. iPod functions are seen on the display. The AVN4430 also is equipped with a USB port.

This product is developed jointly with TomTom NV. The TomTom navigation device has a 4.3″ WQVGA display with quick responding touch control for all functions. It will indicate source unit information when docked. It functions as a standalone portable navigation device when removed. Connected to a computer, it can take advantage of the rich content TomTom offers online such as Mapshare, navigation voices, POI edit and others. Hands-free calling and voice recognition are also included. Removing the navigation section deters unauthorized removal. A separate mounting kit is available for using just the navigation section in another vehicle.

“The AVN4430 is an exceptional product with all the performance and functionality of a traditional installed system and with the added ability to be used as a portable navigation device and Bluetooth hands free system,” said Mike Odle, Vice President of Sales & Marketing at ECLIPSE. “It is a new product concept and one that appeals directly to the demands and expectations of a large and growing market segment. The AVN4430 provides the specialty retailer with a powerful mechanism to drive consumers into their stores with a product that they may have been missing until now.”