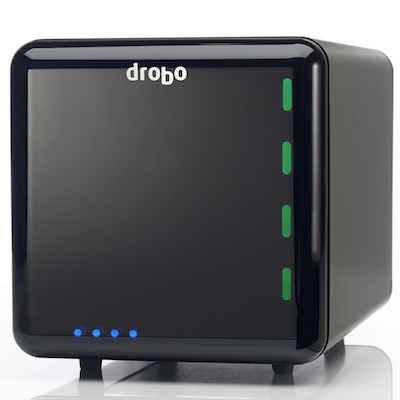 Connected Data today announced its third generation 4-bay Drobo storage system which adds USB 3.0 connectivity along with significantly faster rebuild times and enhanced support for Apple’s Time Machine. This 3rd generation Drobo features a new low price of $349 and a completely new architecture, making it three times faster than the previous generation. In addition, four times faster rebuild times maximize data availability in the event of a disk drive failure, and the addition of battery back up provides even more protection in case of a power outage.

If a drive fails, Drobo automatically protects data without user intervention. In addition, you can purchase the capacity you need now and increase space by adding additional disk drives, or by just swapping smaller disks with larger ones later. When you do, the additional capacity is instantly available. Drobo even protects against one or two simultaneous drive failures with just one click.

Like all Drobo products, the third generation Drobo is built upon the award-winning BeyondRAID technology. BeyondRAID is the foundation that allows first and second generation Drobo customers to seamlessly upgrade to a new Drobo by simply removing the disk pack from their current Drobo, and moving it to their new one. Upgrading not only gives customers an instant performance boost, but also delivers all the other benefits of the new Drobo.

Drobo today also released an integrated feature that allows users to easily allocate a specific amount of capacity to be dedicated for Time Machine backups that preserves the maximum space available for data storage.

Pricing and Availability
MSRP for the new Drobo Gen3 is $349 USD. Pre-orders are being accepted starting today at www.drobostore.com, and through select channel partners. Shipments are scheduled to begin in late April 2014.