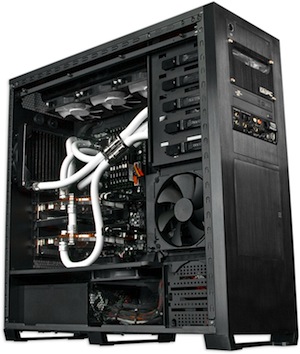 Digital Storm has upped the ante by offering its customers an industry leading Noise Suppression Package. Through the use of noise dampening material, tuning of fan speeds, adjusting chassis air-flow and analysing the system’s noise signature, Digital Storm has virtually eliminated the transmission of sound emanating from the PC.

Prior to shipping to the customer, each Digital Storm system undergoes a rigorous 72-Hour Stress-Test. Digital Storm technicians stress-test and benchmark the system via industry standard testing software coupled with a proprietary testing process that detects components which can be prone to future failure.

“With Black | OPS, our engineers designed, integrated and optimized our gaming PCs from the ground up; the result is nothing less than astounding,” commented Rajeev Kuruppu, Digital Storm’s Director of Product Development. “Unlike other gaming PC integrators, who simply cram the latest hardware into chassis, Digital Storm’s engineers select the highest quality components and ensure that every piece works in perfect unison with each other. We truly believe that our Black | OPS systems will redefine the standards that gamers hold their systems to.”

Digital Storm’s Black | OPS systems are currently available for purchase at DigitalStormOnline.com. The Extreme configuration has a base price of $3,102 & each Digital Storm system comes with a 3 year parts and labor warranty, including replacement parts, and lifetime customer support.

About Digital Storm
Founded in 2001, Digital Storm has rapidly emerged as the predominant name in system integration. With expertise in gaming and workstation PCs, Digital Storm’s mission is to deliver its customers bleeding edge technology and performance, coupled with rock solid stability and support. As a validation of Digital Storm’s success, the company has retained an “A+” rating from the BBB since 2006 and its systems have received the industry’s most prestigious awards.