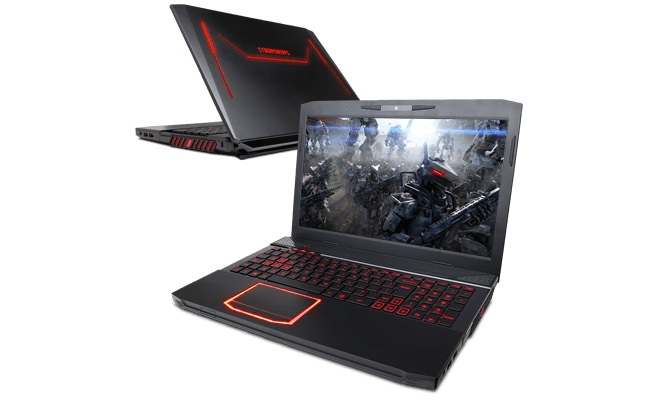 CyberPowerPC today announced the Fangbook III HX6, a 15-inch gaming notebook PC priced from $1100. It features a 4th Generation Intel Core i7-4700MQ processor and the NVIDIA GeForce GTX 860M graphics, along with a variety of CPU/GPU upgrade options.  The processor sips power when idle or under general workloads. It cruises at 800MHz, and then kicks up to 3.4GHz when you need it. The NVIDIA GeForce GTX 860M features 4GB of GDDR5 memory and exceptional power efficiency that can extend battery life.

CyberPowerPC added several distinct features for gamers. The Fangbook III HX6 has an automatic “kickstand” which deploys when the notebook is opened to prop up the rear edge of the notebook to allow air to flow freely through the intakes on the bottom surface. This keeps components running cool and at their optimal speed, which leads to better long-term performance and reliability. The kickstand also makes the Fangbook III HX6 more ergonomic, tilting the keyboard slightly towards the user to reduce wrist strain.

Other unique features include three shortcut keys for extra intense gaming sessions, which can kick the cooling fan into overdrive, turn on the backlight mode, or underclock the CPU and reduce the fan speed.

The Fangbook III HX6 features an aggressive design to complement its name. A black and red color scheme appears throughout the notebook from mesh accents on the fan grills, to the lighting on the notebook’s lid, to the backlighting on the keyboard and LEDs that surround the trackpad. When the Fangbook III HX6 goes to sleep, the red LEDs on the input surface appear to “breathe” to let you know that the power is just a click away.

Price and Availability
The CyberPowerPC Fangbook III HX6 will be available November 5, 2014 starting at $1,095.