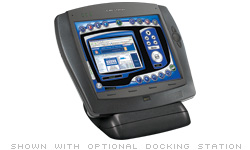 Access data and run applications on other computers from the TPMC-8X via Remote Desktop, while onboard NetMeeting and Skype applications enable conferencing and voice-over-IP directly from the touchpanel. Built-in Bluetooth enables the use of wireless devices such as a mouse and keyboard, while a USB port is provided to connect wired devices. No external computers are needed.

In addition to the wide range of streaming video formats supported by its onboard media player applications, the TPMC-8X also features native support for wireless streaming video from a variety of 3rd-party Web cameras and servers using the motion-JPEG format. Whether watching a favorite DVD or checking the kids by the pool, the TPMC-8X makes it easy to view video sources right on the touchscreen.

The built-in biometric fingerprint scanner takes convenience and security to a new level, identifying individual users automatically. With just the touch of a fingertip, each user can be presented with a personalized interface with its own graphics, preferences and access privileges.

For more information about the new Isys i/O TPMC-8X visit EHX booth #1909 or go to http://www.crestron.com/products/show_products.asp?jump=1&model=TPMC-8X