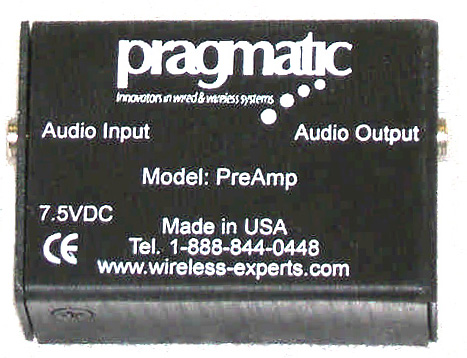 The Preamplifier 9 is another advancement in Pragmatic’s HideAway Series of audio components, which offer the most compact and efficient designs. The miniature yet powerful preamplifier delivers high quality performance at an affordable price.

Much of the music people listen to today come from computer sound card outputs, portable CD players, MP3 players, satellite radio receivers, and others sources. These modern audio sources have very low-level audio output, which is insufficient in order to produce normal audio outputs from most amplifiers. The Preamplifier 9 offers a fixed gain block between the sources with extremely low noise and very little distortion. In addition, it produces unexpected sound depth and musical clarity.

Pragmatic continues its mission to produce environmentally friendly products by designing the Preamplifier 9 to operate on a low power 7.5 V DC. It also fits inside a trim 2.5″ W x 1.65″ H x .85″ D box and weighs an impressive 1.23 ounces. Many assume that in order to make the product small and efficient they must sacrifice on performance quality, but the Preamplifier 9 dispels that belief with its ability to perform just as well or better than its larger competitors.

Pragmatic Communications Systems, Inc. is a Silicon Valley based company established in 1994 to design, develop and produce a variety of innovative and environmentally conscious products for wireless audio, video and data communications. The majority of the company’s products up until 1997 were designed for industrial and commercial applications, after which Pragmatic branched into the consumer market. The success of the older products led to a strong and dynamic technology base, which helps fulfill Pragmatic’s mission to create solutions to long unresolved technical problems with designs that are both compact and energy efficient. This belief has been applied to a new generation of Pragmatic products such as PADS, DMS, DAVES, CATS, True Music wireless hi-fi system, and True View wireless video system.

More information on the products mentioned here can be found on the Pragmatic website at http://www.pragmatic1.com